As the COVID pandemic sees a major backlog of weddings in Ireland Irish churches are breaking centuries of traditions. 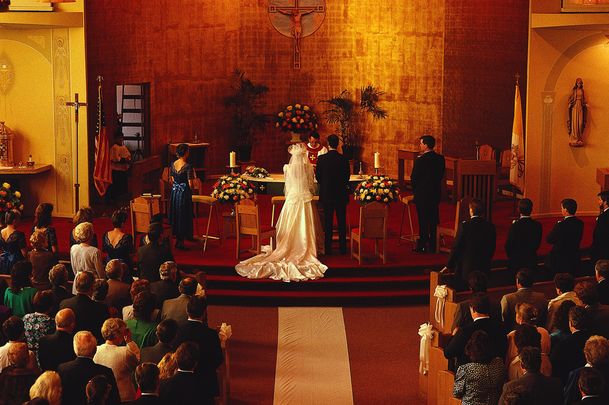 Who's getting married on a Sunday?! "We’ve never had a Sunday wedding in over 40 years and I have no problem with it whatsoever." Getty

Churches across Ireland are set to break from centuries of tradition by allowing weddings to take place on Sundays.

According to a report from the Irish Daily Mail, the move comes amid growing pressure from the wider wedding industry reeling from the impact of COVID-19.

Just 244 weddings took place in Ireland between late March and mid-July because of coronavirus. In normal circumstances, somewhere in the region of 12,000 ceremonies would have been held over the same period of time.

Traditionally Sunday weddings have been frowned upon in Ireland amid concerns they clash with Sunday Masses.

However, with demand for wedding venues at an all-time high since lockdown restrictions were eased, hotels and other venues looking to make up for a shortfall in earnings have appealed to the church to change the rules.

From Monday, July 20, gatherings of 100 people indoors or 500 people outdoors will once again be permitted in Ireland.

Speaking to the Mail, Father Ray Donovan, a parish priest in Caherconlish, Co. Limerick, and spokesperson for the Association of Catholic Priests, welcomed the change while acknowledging the added pressure it puts on priests.

“As far as I know, we’ve never had a Sunday wedding in over 40 years and I have no problem with it whatsoever,” he said.

“I think the church doesn’t want to encourage it, with Masses and a lot happening on a Sunday but it’s very understandable if it’s only for a number of months and I think most priests will be flexible.”

Not all priests have been quite as forthcoming, with one, who asked not to be named, saying that it would not be allowing weddings on a Sunday.

They instead urged couples to push dates back to next year.

The change has been welcomed by the Irish Hotel Federation (IHF), after a period of prolonged struggle for the industry.

IHF President Elaina Fitzgerald nevertheless called for clarity on the guidelines for wedding gatherings in Ireland.

“We are calling on the government to allow hotels that can safely host larger weddings to do so based on the size and scale of the venues, rather than imposing a general limit on how many people can gather at any venue, regardless of safe capacity,” she said.