The station is being erected in an Irish area of Montreal with deep ties to the Great Hunger. 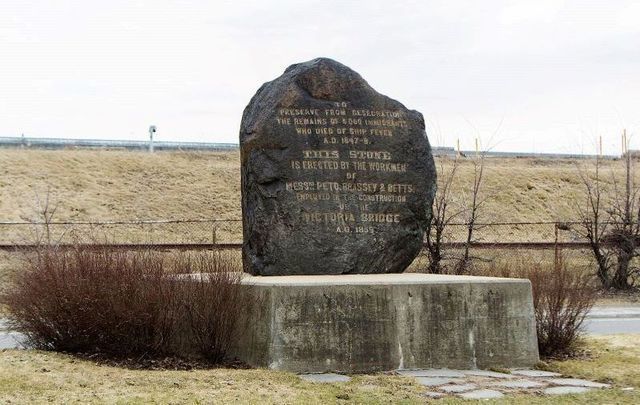 A number of Irish organizations in Montreal have expressed outrage after the city's mayor announced that a new light railway station in the city's Irish quarter would not be named after the area's Irish heritage, which dates back to the Great Hunger.

Valérie Plante, the Mayor of Montreal, announced Monday that the new REM light railway station in the Irish area of Griffintown would be formally named "Griffintown-Bernard Landry" in honor of the former Quebec Premier.

However, a number of Irish community organizations are unhappy with the name, pointing to the fact that nearly every other station on the new 41-mile REM line was being named after a geographic area and not a historical figure.

Kevin Tracey, of the United Irish Society, was particularly vexed about the name and said that it took away from Griffintown's Irish identity.

"I don't think we should be sharing something. It seems to take away from identifying the area," he said on iHeart Radio Canada.

Tracey said that a huge amount of people who helped build Montreal lived in Griffintown and that the city should have noted that by naming the new station after the Irish community.

"We have no issue with the Landry family or anything like that, but the city should have given it more thought before going down this path," he said.

Mayor Plante announced last fall that the station would be named after Landry to recognize his important contributions to the area, prompting an outcry from members of the city's Irish community who urged her to reconsider.

The Irish community wants the station to be simply called Griffintown in honor of the area's Irish heritage.

Griffintown has close ties to the Great Hunger.

The area is home to the Black Rock memorial, which was erected in 1859 in honor of Irish Famine victims who perished in Montreal by the thousand amid a typhus outbreak. The memorial is the oldest Irish Famine memorial outside of Ireland.

Workers additionally found bone fragments belonging to dozens of Irish people from the Famine era during the early stages of the new station's construction.

Plante acknowledged that the station's name would be unpopular among some parts of the city's Irish community.

"I feel like today some people will be happy and some people won't be happy, but the hyphen is a very important part of the name, and Griffintown is coming first," she said.

"This station is also a tribute to the tremendous contribution made by Bernard Landry to our city's development, as it is located adjacent to the Cité du Multimédia, which has become a symbol of our former premier's bold economic vision, the impact of which lives on today," she continued.

Happy to unveil, with @CDPQInfra, @rouleauchantal and Chantal Renaud, the models of the Griffintown-Bernard-Landry #REM station - a link between Griffintown and the Irish heritage of the metropolis, and the Cité du Multimédia, legacy of Mr. Landry. #polmtl #polqc pic.twitter.com/HNnnIuJk6H

Fergus Keyes, of the Montreal Irish Memorial Park Foundation, said that mayor was ignoring the wishes of the Irish community.

"It’s totally unacceptable to us. It demonstrates a lack of history of Montreal and a certain level of arrogance on behalf of the Mayor of Montreal," Keyes told CTV News.

Keyes vowed that the Irish community in Montreal would keep fighting until the station's name was changed.

"It is not going to go away. We will never let that station be named after Mr. Landry," he said.

He said that community groups were considering demonstrations, lobbying, letter-writing campaigns, and even legal action in order to change the name of the station.