A group of Irish and US activists and artists have announced a major rally and concert in New York on the evening of March 17. 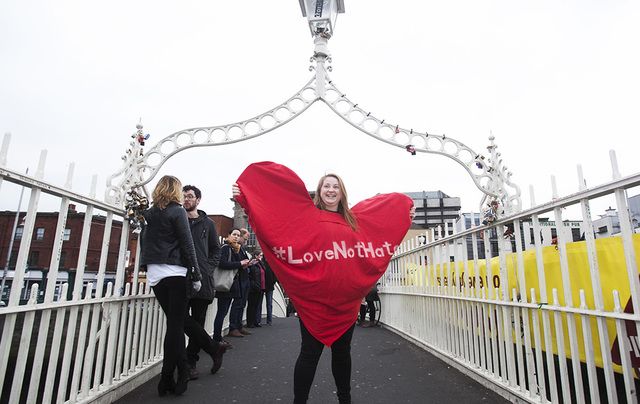 The ‘Irish Stand’ event aims to be a ‘global call for justice and equality’ and will take place in the famous 2500-seat Riverside church in Manhattan. RollingNews.ie

A group of Irish and US activists and artists have announced a major rally and concert in New York on the evening of March 17.

The ‘Irish Stand’ event aims to be a ‘global call for justice and equality’ and will take place in the famous 2500-seat Riverside church in Manhattan, an iconic venue steeped in a rich social justice legacy where Martin Luther King and Nelson Mandela have given famous addresses.

The rally was initiated by Irish Senator Aodhán Ó Ríordáin, and he will stand alongside artists and activists including New York-based Irish playwright and Waking the Feminists organizer Lisa Tierney Keogh, Council of State member Ruairí McKiernan, and community groups in New York.

The event will feature contributions from New York-based Irish author Colum McCann, comedian Maeve Higgins, prominent US writer and activist Shaun King, and "West Wing" actor Richard Schiff, among others. Other high profile musicians and speakers will be announced in the lead-up to the event and efforts are being made to invite representatives from communities adversely affected by racism and prejudice.

Organizers say the event is inspired by the Irish experience of oppression and forced emigration and aims to send a message of unity at a time of much fear and division in the world. It is also hoped that others will take up the call and host St. Patrick’s Day "Irish Stand" style events in Ireland and in cities throughout the world.

Ó Riordáin, whose Senate speech about President Trump went viral internationally with over 40 million views in late 2016, said he feels it has never been more important to make a stand and speak out.

“Many of the struggles that Martin Luther King campaigned on are sadly the same struggles people face today. We are witnessing attacks on workers, on the environment and on vulnerable communities, especially migrants and immigrants," Ó Riordáin said.

"It is so important that we don’t sit back in silence. I’m glad to say the support we’re receiving is overwhelming. Our hope is to send a clear message out that Irish people stand in unity with people of different races in calling for justice and equality in the U.S, Ireland and around the world.”

Read more: Many Irish in Ireland and in US fear Trump’s victory

Actor Richard Schiff, who played Toby in the "West Wing," believes the US is currently facing major challenges and the Irish Stand event is important.

“We are facing an unprecedented challenge to our democracy for the first time in my lifetime. And a challenge to our basic freedoms and rights delineated so profoundly in our constitution. That there is a spontaneous combustion of protest and resistance around the world is as remarkable as it is necessary," said Schiff.

"My wife is [an] Irish American. I know first hand that the Irish don't stay silent when they are wronged or see an injustice perpetrated anywhere. I stand with the Irish on St Patrick's day inspired by their voices and passion for justice."

Irish Stand will take place at 7.30 pm on March 17 at The Riverside Church in the City of New York. Tickets will cost $15. For more information on the event or to buy tickets, visit www.irishstand.org or follow @irishstand on Twitter.