Northern parts of Ireland may see a brief bit of snow on Friday. 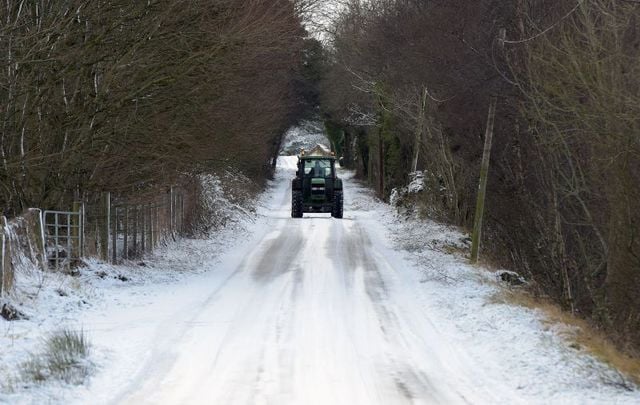 Parts of Ireland could see some snow this week. Getty Images

Parts of Ireland could see snow this Friday, but Met Eireann says it won't be much

Carlow Weather said in a Facebook post that a “wintry mix” could be in store on Friday for locations on higher ground:

Some very interesting charts for Friday and Saturday with a low system moving up but cold air pushing down. GFS model...

The service added: "But ECMWF and GFS not in agreement as battle line of cold and mild air forms over Ireland. Stay tuned over coming days for updates on whether cold or mild wins out!"

Donegal Weather Channel said in a Facebook post on Monday: "Overnight and this morning GFS model run shows an area of very heavy rain and milder air moving in from the southwest on Friday Morning pushing northeastward up over Ireland on Friday and as this rain moves up over Ireland is shows that the upper air temperatures would support this period of precipitation to turn into sleet and snow in places particularly over upland areas as the mild and most air bumps into cold air which moved in from the northwest of Ireland .

"The ECMWF run yesterday also supported the idea but mainly confined any wintry showers over the northwest mainly over Donegal.

"It will be a watch and wait to see who wins the battle and where the battle line is drawing between Mild bumping into that colder air."

❄ WINTRY SHOWERS OFF SLEET AND SNOW ANYONE ❄ Overnight and this morning GFS model run shows a area of very heavy rain...

The Donegal Weather Channel also pointed out: “The first snowfall of 2018 was recorded in the Donegal over the same weekend last year on the morning of the 27th of October in the Barnesmore Gap with a covering which would be a year ago this Saturday morning.”

Cathal Nolan of the Midland Weather Channel said on Monday: "This is not an April fools joke come early, but rather there is a pretty credible risk that some areas of the country may see their first snowfall of the 2019/2020 winter season as early as this coming Friday."

Read More: Ireland had its first snow of the winter this week

A Met Eireann spokesperson, however, told Joe.ie that they weren’t expecting more than “10 minutes of snow on the north-most hills of Northern Ireland," adding that the chance of seeing snowfall is "nil."

Met Éireann pointed out that heavy rain is expected on Friday, with some parts of the country at risk of flooding. Snow has also been forecasted for Scotland on Thursday, though this is expected to stick at only high altitude areas.