Ireland's first snowfall of winter began late on Thursday night amidst several cold weather advisories from Met Éireann in place through the weekend. 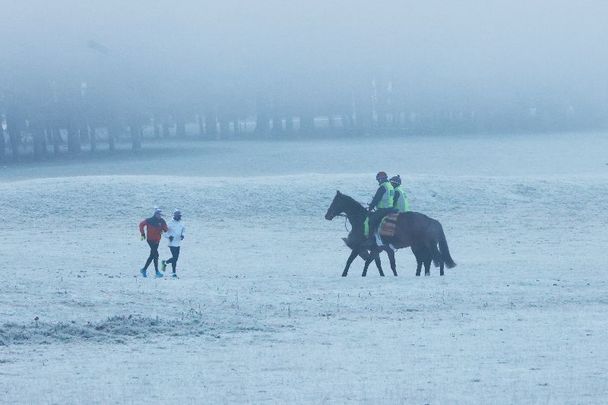 December 9, 2022: Race horses and riders shrouded in fog, with frost and and snow underfoot, encounter two runners, as they return from a morning training run on the Curragh Plains in County Kildare. RollingNews.ie

Parts of Ireland were covered in snow on Friday morning following the arrival of a bitter cold snap.

Ireland's first snowfall of winter began late on Thursday, December 8 in some parts of the country, with a yellow warning for snow and ice in place for Dublin and Wicklow between 9 pm on Thursday and 6 am on Friday. The same weather warning is in place in Donegal until noon on Saturday.

Met Éireann said Friday will be a very cold day, with temperatures not rising above 0C to 4C.

The lowest temperature reported at an Irish weather station on Friday morning was at Mount Dillon in Co Roscommon, where temperatures plummeted to -7C at 8 am.

Temperatures dropped to -3C at weather stations at Dublin Airport and the Phoenix Park at the same time on Friday morning.

Met Éireann said frosty and icy conditions will spread across the country throughout the day on Friday, with some hail and snow showers expected in countries on the Atlantic coast, although most of the country will remain dry with low wintry sunshine.

Temperatures are also expected to drop to between -1C and -5C on Friday night.

Met Éireann added that it will be "bitterly cold both by day and night" and said the cold weather is expected to last until next week, warning of "treacherous conditions" over the weekend.

The cold weather has already caused some disruption to public transport in Ireland, with Irish Rail and Dublin Bus announcing this morning that a number of services were delayed or canceled.

Sunrise over the Wicklow mountains in the #sneachta pic.twitter.com/towkNrY1C8

Dublin Bus is accepting all valid Luas and DART tickets on Friday.

Bus Éireann announced that it has had to cancel some of its scheduled services in addition to a small number of school transport services in the west.

Dublin Airport operator the DAA said its staff worked through the night on Thursday to de-ice aircraft, clear snow, and spray roads and walkways.

The DAA said runways and taxiways were operational all morning on Friday but said some flights were experiencing delays.

🎶 It's beginning to feel a lot like Christmas!🎄❄️☃️ #sneachta #chapelizod pic.twitter.com/QhvIyGwIh5

Keith Leonard of the National Directorate Fire and Emergency Management urged the public to check in on elderly and vulnerable members of the community during the cold snap and also advised people to take care of “slips, trips and falls”.

He added that local authorities and Transport Infrastructure Ireland would be salting and gritting roads throughout the day on Friday.