Jim and Frank Flanagan (79 & 91) spend their days tending to the traditional streetlamps that cut through the middle of Europe's large urban park. 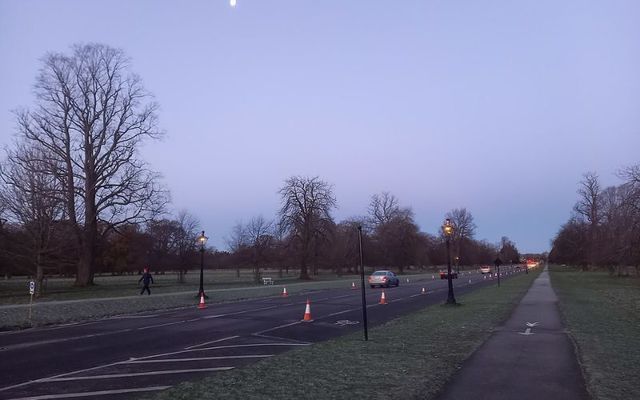 Two elderly brothers are keeping a dying tradition alive in Dublin, tending to the 224 traditional gas streetlamps that still remain in the Phoenix Park.

Jim Flanagan, 78, and his older brother Frank, 91, of Blackhorse Avenue in Dublin, spend their days tending to the traditional streetlamps on Chesterfield Avenue, which cuts through the middle of the large urban park.

Jim and Frank, who are fourth-generation lamplighters, have been servicing the lights in the park since their father retired in 1984.

Their great-grandfather Nicholas Flanagan and his four brothers began tending to the lights in 1890, using a long pole with a torch at the end to light each lamp individual at sunset every day before extinguishing the lights at daybreak the following morning.

The lamps were no longer lit by hand when Jim and Frank's father joined the service in 1924 and instead operated on a timer switch.

Although Dublin had gone electric by 1957, the tradition of gas lighting persisted in the Phoenix Park, partly because it causes a lower level of light pollution and helps to protect the park's nocturnal species.

The brothers, who also maintain the lights at Áras an Uachtaráin, told the Irish Times that they are "a part of history".

"We clean the same lamps as our father and our grandparents each day," Frank told the Irish Times.

To service each lamp in the park, Jim and Frank must climb a ladder and replace the mantle - a silk mesh that produces light - before cleaning out the pilot light. They also have to set a new time for the lamp to turn on, winding each lamp's individual clock 28 times by hand. The time is changed once every 14 days, Jim told the Irish Times.

It takes five people three days to service each of the 224 gas lamps in the Phoenix Park and Jim and Frank have help from their grandchildren Matthew Flanagan and Connor Clarke who work as part-time lamplighters. Jim's son-in-law Ronan Clarke and Frank's son-in-law John Kelly also help out on a part-time basis.

Dublin is one of a small number of European cities to continue using gas street lamps. Jim told the Irish Times that there is no indication of that practice coming to an end but added that the Office of Public Works intends to replace the clocks with light sensors, eliminating the need to wind the clocks by hand every two weeks.

"As soon as it turns dark, a light sensor will pick that up and a spark unit will cause the lamp to light. In the morning, the light unit will sense the new light and turn it out," Jim said.

The brothers see between five and ten lights out every evening during their nightly inspections, Jim told the Irish Times.

They are both on call 24/7, working weekends and late nights in the summer when the sun sets after 10 p.m.

However, they told the Irish Times that there are some perks to working such unsocial hours. Jim said he often hears the sounds of bucks battling with each other in the park at night as they compete for a mate.

"You can actually hear the crashing of the horns if you come out at night-time at a particular time of the year."

They have no plans to retire anytime soon and plan to pass the tradition onto their kids and grandkids.

"I’m here every day, and it couldn’t be a better place to be," Jim said.