Gust of up to 75mph expected with strongest winds in the west of Ireland as 13 counties in Ireland predicted to be affected by latest Irish storm. 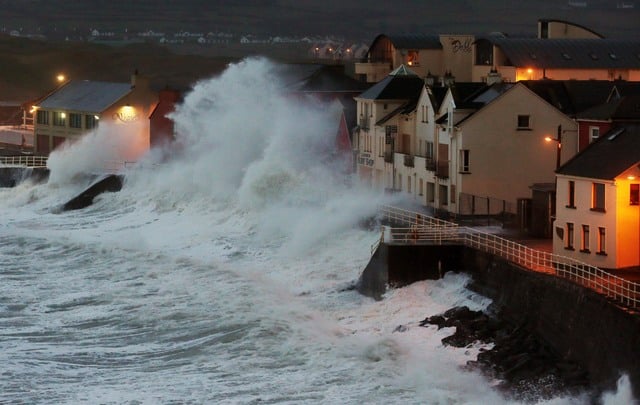 Lahinch, County Clare during a storm in 2014. RollingNews

Gusts of up to 75mph expected with strongest winds in the west of Ireland as 13 counties in Ireland predicted to be affected by season's first Irish storm, Storm Ali.

Thirteen counties in Ireland have been placed under a Status Orange wind warning for Wednesday as winds of over 75mph (120kmph) are expected. Winds caused by Storm Ali will “track close to Atlantic counties”, according to Ireland meteorological experts, Met Éireann.

Weather forecasters have upgraded Ireland’s wind warning as Storm Ali approaches the west coast with gusts of up to 75mph, and average wind speeds of 40mph to 50mph.

The Status Orange warning is in place for counties Cavan, Monaghan, Donegal, Dublin, Kildare, Louth, Meath, Galway, Leitrim, Mayo, Sligo, Clare, and Kerry. This warning will be in place from 5am Wednesday morning, September 18, until 1pm Wednesday lunchtime.

A Status Yellow warning remains in place for the rest of the country.

#StormAli has been called. Very strong winds and heavy rain sweeping in on Wednesday https://t.co/JsUehkSvXL pic.twitter.com/BIG7buQ1Fb

Met Éireann forecaster Gerry Murphy told RTE Radio “The most significant feature will be a very windy day tomorrow in all areas.

"There are high winds expected tomorrow. So, do stay tuned for warnings," he added.

Automobile Association (AA) Ireland, Director of Consumer Affair, Conor Faughnan said: "The expectation with this storm, according to Met Eireann, is that we will have a large volume of rainfall in quite a short space of time, meaning that the risk of flooding in the affected areas is quite high.

"When you combine this with the lengthy, mostly dry spell of weather we've had recently, motorists can expect roads in the affected areas to be significantly more slippery.