Tragic death of tourist in West of Ireland as heavy winds and Status Orange weather warning remain in effect for Ireland. 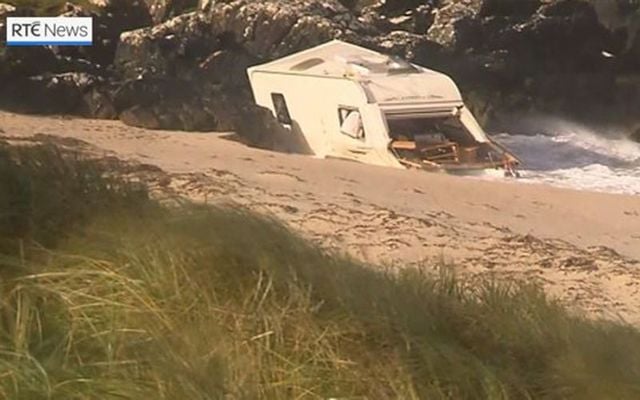 Storm Ali: High winds blew the caravan a women in her 50s was sleeping in onto Acton's beach, near Clifden, County Galway.

Two deaths have now been confirmed as heavy winds and Status Orange weather warning remain in effect for Ireland.

One man has died and another was injured when a tree fell on them while they worked in a park in Northern Ireland The victim is thought to be a man in his 20s who was doing contract work for Northern Ireland Water when the incident happened in Slieve Gullion Park, near Newry, Co Down.

"Police attended the sudden death of a man, aged in his 20s, in the Slieve Gullion Park, Drumintee Road area of Newry this afternoon," said a spokesperson for the Police Service of Northern Ireland.

Earlier in the day, a woman in her 50s died in County Galway after the caravan she was sleeping in was blown down a coastal hill by the gusting winds of Storm Ali.

In a tragic freak accident, the caravan was lifted by the heavy winds and blown down a rocky hill on to Acton's beach at Claddaghduff, near Clifden on Wednesday morning. Gardaí were notified of the incident at 7.45am after winds in the area kicked up considerably.

It is believed that the woman was a tourist, visiting from Europe, and had been holidaying at a campsite in Claddaghduff, in Connemara.

The scene of this morning’s fatality at Claddaghduff, outside Clifden. More on @rtenews pic.twitter.com/BuvSBFCUDT

Gusts of up to 89mph (143km/h) have hit Mace Head in Galway classing this as a serious wind event. Winds recorded in the area had reached Gale Force 11.

“As President of Ireland, may I express my deepest condolences to her family. I would also take this opportunity to pay tribute to all those, in statutory and voluntary organizations around the country, who are helping and stand ready to assist their fellow citizens, and who are working to maintain essential services around the country.”

Storm Ali has left more than 55,000 homes and businesses in Ireland without power. Also due to the gusting winds dozens of flights, across the island, have been canceled.

The storm, the first of the season for Ireland, is predicted to move quickly eastwards. However, forecasters had predicted heavy rain, flying debris, fallen trees, power cuts, flooding and travel disruption are possible in the worst-hit areas.

The Orange alert will remain in place until 1 pm on Wednesday. A less extreme Yellow warning will be lifted at 5 pm at the earliest.

Do you know anyone who might be affected by Storm Ali? Stay safe out there.