A motion tabled by Sinn Féin declaring Israel’s actions as “de facto annexation” was passed in the Dáil Eireann, Ireland's parliament, on May 26. 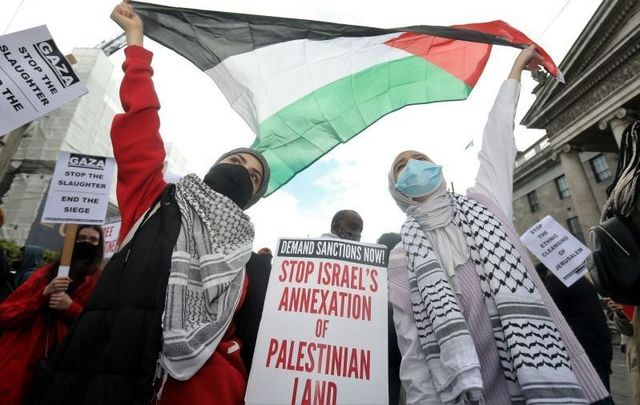 May 22, 2021: Fatima Aydi and Hebba Maarouf, who are both Palestinian, at a March for Palestine in Dublin. RollingNews.ie

Israel's Ministry of Foreign Affairs has since said that it "outright rejects" the motion that was passed in the Dail Eireann, Ireland's parliament, on Wednesday.

The motion, tabled by Sinn Féin on May 25, condemns “the recent and ongoing forced displacement of Palestinian communities in the occupied Palestinian territory” and declares that “Israel’s actions amount to unlawful de facto annexation of that territory.”

On Wednesday, the motion was passed in the Dáil. RTÉ reports that it was adopted unanimously.

While the motion passed, an amendment introduced by People Before Profit to expel Israel’s Ambassador to Ireland and to impose sanctions against Israel was defeated in a vote of 87 against to 46 in favor.

People Before Profit's amendment to expel the israeli embassador and place sanctions on Israel has just been defeated.

Shame on the parties who stood tonight with the oppressors. We will keep fighting. #ExpelTheIsraeliAmbassador #freepalestine pic.twitter.com/IDsPW3Gt19

Tabling the motion on May 25, Sinn Féin TD John Brady, who serves as the party’s Foreign Affairs spokesperson, said: “Israel has never been held to account for its actions."

Mary Lou McDonald, the President of Sinn Féin, said afterward: “We condemn the illegal and ongoing annexation, the illegal seizure of Palestinian land by the Israeli occupier.”

Ireland's Minister for Foreign Affairs Simon Coveney told the Dáil on Tuesday: "The scale, pace and strategic nature of Israel’s actions on settlement expansion and the intent behind them have brought us to a point where we need to be honest about what is actually happening on the ground.

"We need to call it out for what it is. It is de facto annexation.

"This is not something that I or this House say lightly. We are the first EU member state to do so, but it reflects the huge concern we have about the intent of the actions and, of course, their impact."

After the motion was passed on Wednesday, TD Brady said: “Tonight, the Irish people have secured a historic victory for the people of Palestine.

“The decision by the members of the Dáil to vote to accept the Sinn Féin motion on annexation is a sure reflection of the strength of feeling that runs in this country a/t the treatment of the Palestinian people by the apartheid state of Israel.

“Ireland now stands as the first country in Europe to categorically state without equivocation that Israel has carried out the crime of annexation in the occupied Palestinian Territories."

Brady added: “The Irish people have pushed the government over the line. The recognition that de facto annexation has taken place in the Occupied Palestinian Territories is now the formal position of Ireland.

“The Irish people, through the Dáil, have stated that Israel is guilty of the crime of annexation.

“The significance of the victory in getting the Irish government to acknowledge that annexation has taken place is enormous.

“It is now incumbent upon the Irish government to accept the imprimatur of the Irish people and take this motion and press for action in the EU, and for action on the UN Security Council on this issue."

He continued: “The Irish government must act to introduce the Occupied Territories Bill. It must recognise the state of Palestine.

“It must ensure that Israel is held accountable for its action by the international community.

“Hopefully, other countries can follow Ireland’s lead, and take this motion as a template to use in their own parliaments.”

Tonight’s decision by the Dáil to unanimously support the @sinnfeinireland motion declaring that Israel has illegally annexed Palestinian lands is historic, Ireland is the first country to state that. We need to use that mandate to hold Israel to account for their crimes 🇵🇸✊🏻🇮🇪 pic.twitter.com/3bDkjmM5FP

In a series of tweets on Wednesday evening, Lior Haiat, spokesperson of Israel's Ministry of Foreign Affairs, said "Israel outright rejects Ireland's outrageous and baseless position regarding Israeli communities in Judea and Samaria."

This position reflects a blatantly one-sided and simplistic policy... pic.twitter.com/6HQflk8pJ1

3/3 The motion that was adopted today in the Irish parliament constitutes a victory for extremist Palestinian factions. This motion distances Ireland from its ambition to contribute and play a constructive role in the Israeli-Palestinian context.