Irish Government to vote on motion to expel Israeli Ambassador

Members of the Irish government will today vote on a motion to expel Israel's Ambassador Ophir Kariv after a period of violence between Israel and Palestine. 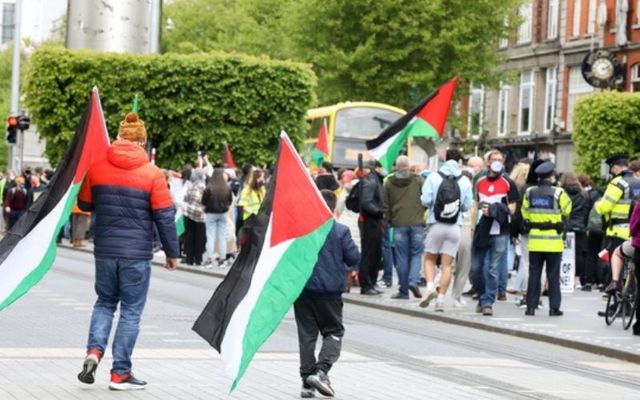 Huge crowds gather in Dublin on May 22 to protest against Israeli aggression against Palestine. Rolling News

Pro-Palestinian groups in Ireland are hopeful that a vote this week in the Irish Dail will result in the expulsion of the Israeli Ambassador following the outbreak of conflict in Gaza and Israeli cities in recent weeks.

The motion was submitted by 11 TDS from four different parties last week before the ceasefire was agreed upon between Israel and Palestine.

The motion, which accuses Israel of war crimes, ethnic cleansing, and illegal settlement expansion, says that over 60 Palestinian children have been murdered by the Israel Defence Forces since the outbreak of the conflict.

It also states that the recent escalation in violence between Israel and Palestine is a result of an attempt to ethnically cleanse 28 Palestinian families from the Sheikh Jarrah area of Jerusalem.

People Before Profit TD Gino Kenny, who sponsored the motion, urged his colleagues to expel the Israeli Ambassador to Ireland Ophir Kariv in response to Israeli aggression against Palestine.

This is the motion that People Before Profit circulated to all TD’s this week Calling for the expulsion of the Israeli ambassador from Ireland. 10 TD’s have put their names to the motion. This will now go on the Dáil order paper for the record. pic.twitter.com/uhC0rXXqK8

"It’s time for the Irish Government to go beyond words. They need to do deeds, and that deed is expelling the Israeli Ambassador," Kenny told reporters outside the Dáil last Tuesday.

Kenny said that expelling the Ambassador would "send a message to the Israeli government but also to the Palestinian people that they are not alone, but Ireland is with them".

The People Before Profit TD said that Ireland could use its "unique position" on the UN Security Council to send a message to Israel and the rest of the world that crimes against Palestine will not go "unpunished".

Kenny is hopeful that the motion could pass due to the "huge sentiment of being pro-Palestinian" in Ireland.

On May 23, Kenny was part of a group that demonstrated in Dublin calling for a boycott of Israel and the expulsion of the Israeli Ambassador.

There may be a ceasefire but the brutality of apartheid & the expanding occupation continues.

We need to keep the pressure up & #BoycottIsrael & expel the ambassador! pic.twitter.com/cE1XxuBh7o

Ireland's Minister for Foreign Affairs Simon Coveney, however, has flatly refused to expel the Ambassador, stating that it is a "flawed idea" that would sever a line of communication with Israel.

"The idea that you advance the argument that you’re making in refusing to talk to a government or ambassador is flawed," Coveney said. "That’s not how international [diplomacy] works."

An Israeli diplomatic source told the Jerusalem Post that Israel is not concerned by the motion as it was tabled by a small number of "extremists". The source added that Ambassador Ophir Kariv is "not packing his bags".

However, the motion may find support among larger opposition parties such as Sinn Féin, which is the second-largest party in the Dáil.

Sinn Féin has not publically supported the motion, but Ógra Shinn Féin - the youth wing of the party - has launched an online petition to expel the Ambassador, which has received more than 84,000 signatures as of Monday morning.

The party has also called for the expulsion of the Israeli Ambassador for years.

Please sign our petition to EXPEL the Israeli Ambassador from Ireland!

Furthermore, the Jerusalem Times reports that the Irish coalition government will allow TDS to vote on the motion according to their conscience, rather than voting along party lines.

The Israeli publication says that such a move could result in the motion being passed due to the pro-Palestinian sentiment among many Fianna Fáil, Fine Gael, and Green Party TDs.