Ireland could encounter some record-breaking heat in the coming days, prompting Met Éireann to issue a Yellow Weather Warning. 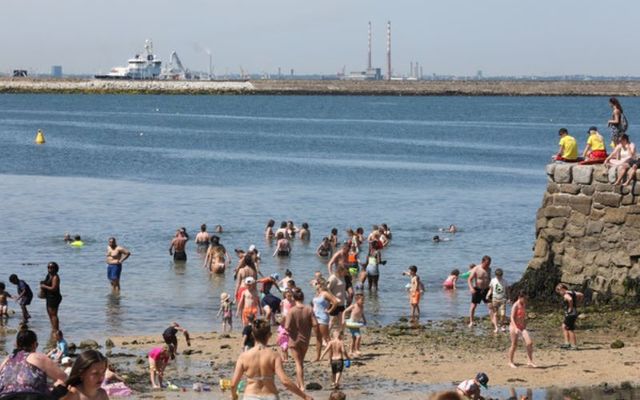 Members of the public enjoy a heatwave in Dublin in July 2021. Rolling News

Met Éireann has warned of "exceptionally warm weather" in ireland this weekend and early next week, with temperatures potentially rising to 32C on Monday.

Ireland will experience exceptionally warm weather on Sunday, Monday, and Tuesday, Met Éireann has forecasted, with daytime temperatures of 25C to 30C degrees generally and possibly up to 32C degrees in places on Monday. Nighttime temperatures will range from 15C to 20C degrees.

However, other models are suggesting that Ireland could be on course to break its record for the highest temperature ever recorded in the country, which was 33.3C at Kilkenny Castle on June 26, 1887. Modeling from Global Forecast Systems and ICON-EU, the German weather service, shows temperatures breaching 33C degrees in parts of Ireland on Monday, and the UK-based independent weather service Netweather has temperatures of 34C in the south midlands of Ireland.

With the high temperatures, Met Éireann has issued a Yellow Weather Warning for the entire country which will come into effect at 6 am on Sunday, July 17, and remain in place until 9 pm on Tuesday, July 19.

With the Yellow Weather Warning comes the potential for heat stress, especially for the more vulnerable of the population, high solar UV index, and risk of water-related incidents.

Met Éireann forecaster Paul Downes told the Irish Times that it was “not out of the realm of possibility” that the all-time record temperature for Ireland could be broken.

Downes said a combination of factors will bring higher temperatures to Ireland for a brief period.

Downes said the high temperatures will be caused by a portion of the Azores High extending from north Africa to Ireland over the weekend, bringing high temperatures but also holding warm air in the south of the continent.

The warm air has already brought 40C-plus temperatures to Spain.

He added that nighttime temperatures may not fall below 20C in some areas, qualifying as a "tropical night".

In the UK, temperatures of 40°C have been forecast for the coming days, prompting the first-ever Red warning for exceptional heat has been issued. Last year, Northern Ireland saw a string of days with record-breaking heat.