The heatwave over Ireland is delivering record-breaking temperatures, fire warnings, and a rare "tropical night." 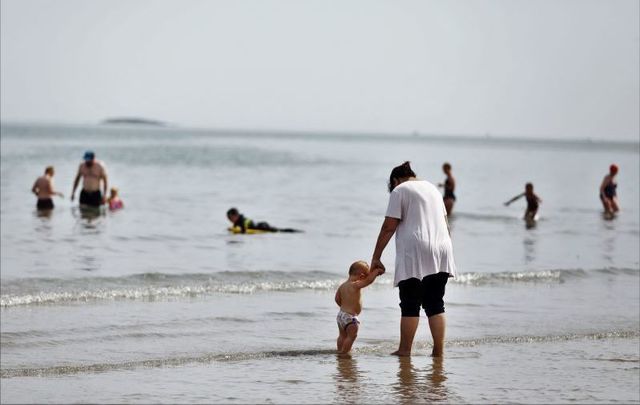 July 22, 2021: Burrow Beach in Sutton, Dublin, where members of the public gathered to enjoy the sun and go swimming. RollingNews.ie

Northern Ireland, for the third time this week, has broken its highest temperature on record as Armagh reached a balmy 31.4°C (88.52°F) just after 3 pm today.

These are the warmest temperatures in the region since recordkeeping began in 1910.

Northern Ireland will remain under an Amber warning for extreme heat through tomorrow, Friday, July 23, at 11:59 pm local time.

This beats the 31.2 °C that Ballywatticock recorded on Saturday and the 31.3 °C that Castlederg recorded yesterday #UKHeatwave #heatwave pic.twitter.com/lItf4fwt8Z

In the Republic of Ireland, Met Éireann has today extended its Status Yellow High-Temperature Warning for the country through Saturday; it was originally supposed to expire on Friday.

The Status Orange High-Temperature warning for Cavan, Monaghan, south Leitrim, Roscommon, Longford, and Westmeath, which was issued on Tuesday, is set to expire at 9 pm local time on Friday, July 23.

Read more about the #heatwave and when it will end in our latest Weather News story 📰👉🏽https://t.co/glZzf7jeFe pic.twitter.com/givdTFpALH

Met Éireann additionally reports that last night “was provisionally the first tropical night in Ireland for 20 years, with Valentia in Co Kerry not observing any temperature under 20.5°C.”

Last night was provisionally the first tropical night in Ireland for 20 years, with Valentia in #Kerry not observing any temperature under 20.5°C

Tropical nights (shaded air 🌡️ above 20°C all night) are rare in Ireland having only occurred around 6 times in the digital record. pic.twitter.com/3f7jMHECNb

Met Éireann today warned of a high UV index across the country as the Department of Health continues to encourage people to be #SunSmart.

UV levels will be high under any clear skies today. Please follow @HseNCCP for advice and stay #SunSmart 😎⛱️🧴

With the heatwave blanketing the island of Ireland, a Condition Orange Fire Warning has been issued in the Republic and will remain in place until 12 pm local time on Friday.

🔥We have issued an Orange Forest Fire Warning arising from weather patterns and expected level of risk, which is expected to peak on Friday.

🕛Warning in place until 12pm on Friday, July 23