The Save Ireland’s Great Hunger Museum group has received a great boost today from three prominent politicians in Connecticut. 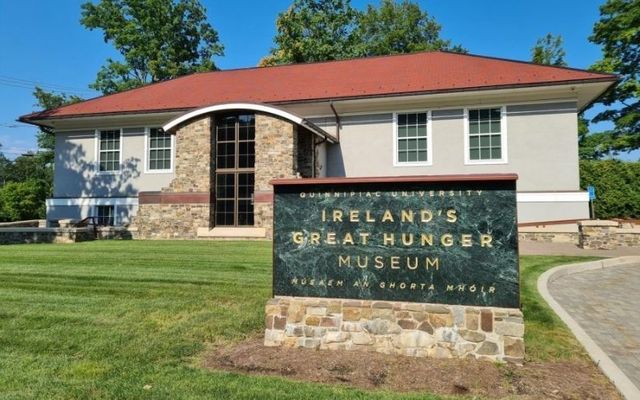 The campaign waged by the Save Ireland’s Great Hunger Museum group, which seeks to re-open and operate the shuttered Ireland's Great Hunger Museum at Quinnipiac University in Connecticut, received a major boost on Wednesday. The state’s two U.S. senators, Chris Murphy and Richard Blumenthal, together with Congresswoman Rosa DeLauro, issued a statement in support of keeping the museum exactly where it is, and its contents completely intact.

Their statement says, “Ireland’s Great Hunger Museum provides a sobering experience of the suffering and resilience of the Irish, a story that unfortunately has been replicated across many decades and cultures.

"With the building in Hamden specifically designed to enhance the story which the collection tells, the museum has become a community treasure and we support the efforts to reopen it in its current location so it can continue its critical mission of education and understanding.

“Further, we strongly object to any proposal that results in the breakup of the collection or transfer to a location outside of Connecticut.”

For the past several months, Save Ireland’s Great Hunger Museum has been advocating that the museum reopen in its custom-made home just outside the Quinnipiac campus in Hamden, Connecticut. The university shut the museum two years ago due to Covid and announced last August that the closure would be permanent.

Prior to the pandemic, Quinnipiac and its new president, Judy Olian, said that the museum was a financial drain and would have to earn money to fund its upkeep. The Save Ireland’s Great Hunger Museum group, however, feels a proper chance was never provided to keep the museum viable.

Turlough McConnell, founder of the group, told IrishCentral that he and his fellow board members are thrilled with the supportive statement from DeLauro, Blumenthal, and Murphy.

“We are grateful that we have federal support for our campaign. Our hope now is that Quinnipiac will rethink its decision to close the museum and allow us to partner with them,” McConnell said.

Earlier this month, McConnell and his fellow board members met with two representatives of Quinnipiac to present a five-year plan to finance and operate the museum in its current location going forward. The meeting was described as cordial and productive.

Afterward, Quinnipiac spokesperson John Morgan told the Irish Voice, sister publication to IrishCentral, “Quinnipiac has been engaged in productive conversations with several different potential partners and is making progress with respect to the (museum) collection and ensuring it remains publicly accessible and continues to promote the important story and learnings of the Great Hunger.”

Ireland's Great Hunger Museum contains the world’s largest collection of Irish Famine art, and its interior was specifically designed to showcase the collection at its finest. It was opened in 2012 by then Quinnipiac President Dr. John Lahey.

One of the “several” potential partners Morgan mentioned is also in Connecticut, but the Irish Voice understands the group wishes to relocate the museum’s contents to another location in the state.

Connecticut Attorney General William Tong’s office is also in the process of conducting an investigation into the closure of the museum.