These 26 people have been named the most inspirational in Ireland

The Gala Retail and Virgin Media Inspiration Awards highlights people who have gone above and beyond for others in their local communities. 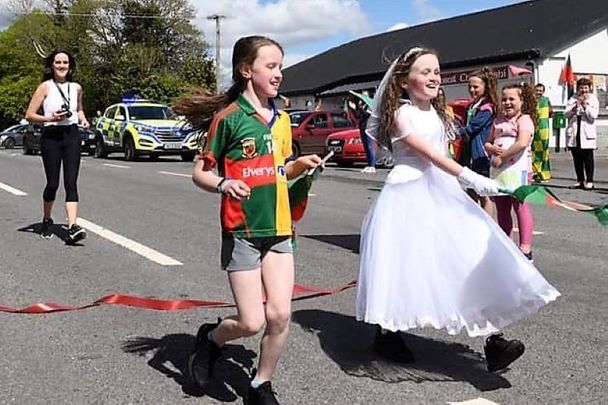 Elouise (R) and her sister Lucia (L) ran a 10k as a fundraiser for Mayo Roscommon Hospice. Caitriona McDonnell, GoFundMe

26 people from across Ireland have been selected as this year’s “Inspirational Heroes” as part of a competition hosted by Gala Retail and Virgin Media.

The awards, first introduced two years ago, were created as a way of celebrating the selfless acts and inspirational deeds of people in Ireland who are making the country a better place.

This year's inspirational heroes were chosen from hundreds of nominations and “made Ireland a better place with their selfless acts and inspirational deeds during the Covid-19 crisis, and how they have gone above and beyond for others in their local community.”

Gala Retail has gifted €20,000 of prizes to the winners, with the county winners being awarded with luxury stays in some of Ireland’s most beautiful Blue Book properties.

Reflecting on this year's heroes, Gary Desmond, CEO of Gala Retail, said: “This year Gala Retail teamed up with Virgin Media for the Inspiration Awards as we wanted to deliver a national platform to shine a light on and reward the amazing people who have become true heroes during life under lockdown and who are making a real difference to Irish society.

“2020 has been hugely difficult for everyone however, it has also demonstrated the immense community spirit that exists within Irish communities. Operating in communities throughout Ireland, Gala Retailers have seen first-hand some of the great work that people have been doing and we are proud to have been able to recognise some of these inspirational individuals. We were overwhelmed by the level of nominations we received from across Ireland and the chosen inspirational heroes are true examples of people who are making Ireland a better place for us all.”

Here are the 25 people who have been named as an Inspirational Hero in this year's Gala Retail and Virgin Media Inspiration Awards:

Carlow Live reports that 14-year-old Aoife Moody put her talent for baking to good use throughout the pandemic and made gift treat boxes for local frontline workers and elderly people cocooning in the Tullow area.

As a post lady, Farrell worked throughout the pandemic bringing joy and laughter to many local homes. She's additionally hailed as a hero for saving an elderly farmer from being savagely mauled by a dog in 2019.

Hogan, who suffered severe brain damage after an unprovoked attack left him blind and partially paralyzed in 2009, helped raise €10,000 for Acquired Brain Injury’s (ABI) residential service in Clarecastle when he undertook a "walkathon" in Thomond Park.

O Callaghan organized more than 20 volunteers from various local organizations to deliver home baking to 100 households within her parish every week when lockdowns began. When lockdowns lifted, she led a major fundraising charge for Cork Penny Dinners, which provides meals free of charge to people in need.

Father Pat Ward helped keep spirits high throughout the pandemic by playing music during his masses which were live-streamed thanks to lockdowns.

O'Reilly is one of the proud founders of Good Grub, a not-for-profit initiative that was launched early on during the pandemic and delivers over 75,000 nutritious fruit and vegetable parcels directly to the families of DEIS school children around Ireland.

Kelly is the chairman of Ballinasloe Town AFC and trains the youngsters of the town 3-4 times a week. He is also is a co-ordinator of the GAA academy, giving up his time effortlessly whilst also running a busy bar in the centre of the town. Over the years, Joseph has contributed a lot to the local town, giving so much of his time into helping the community.

Tralee Today reports that Harte, 8, helped raise over €3,000 for Kerry Parents and Friends Listowel, where she often visited the residents, bringing baked treats to try to brighten up their days.

According to the Kildare Nationalist, Duane has gone above and beyond his call of duty throughout the pandemic, delivering newspapers and checking in on his elderly clients during his post-run. During the day, he picks up errands and local shopping required by those in his neighborhood, whilst in the evening, Shaun started up and continues to run socially distanced quizzes, bingo, and kids discos.

Donoher and her husband Niall set up the Do It For Dan campaign earlier this year to raise money for their son Dan, who required life-saving treatment after being diagnosed with type 1 SMA (Spinal Muscular Atrophy). The campaign has amassed more than €3million in donations, much of which will go to help other children suffering from SMA in need.

After Murphy and her husband tragically lost their son just 90 minutes after he was born, Debbie raised thousands of euro to purchase cuddle cots for hospitals throughout the country so parents could have more time in hospital or home with their baby in a cot. To date, Murphy has funded 28 cots for hospitals all around the country.

Shaw was a key part of the Bravo Charlie Tango Motorcycle group, a voluntary not-for-profit organisation established in the early stage of Covid 19, to protect and support front-line health care workers. Throughout lockdown, Robert helped source much-needed PPE and then collected, organized, and delivered it all over the country. In late May and early June, Shaw organized and distributed frozen desserts, donated by Lily O’Brien’s, to every nursing home and hospital in the Longford and Roscommon area.

Lynch raised more than €20,000 for Age Action and Dundalk Red Cross when she organized a solo dance party in her garden to celebrate her 90th birthday in May.

When 8-year-old McDonnell's First Holy Communion was canceled due to the pandemic, she decided to run a socially distanced 10k with her sister Lucia as a fundraiser for Mayo Roscommon Hospice. The sisters raised over €31,000.

Meath Chronicle reports that Garda Looby went above and beyond in her community during the pandemic, making sure those cocooning were well looked after. She ran an intiaitvie that saw more than 500 Easter cards made and delivered to nursing home residents this year.

A full time Garda with Monaghan Garda An Siochana, Beattie was an integral part of setting up a breakfast club and after school club within St Enda's National School in Scotshouse proving to be very successful with local residents. This year, she embarked on the task of getting a Pre School group within the school and this was opened in September 2020 and has attracted many children from the local area. Beattie's latest fundraising initiative has raised over €1000 in aid of Scotshouse Community Childcare in order to purchase new equipment and to fund the new pre-school service.

During the lockdown, Nolan took her camera and shot photos of over 70 families on their doorstep, donating all the proceeds from her project to Killeigh Community Centre, reports the Offaly Express.

According to the Roscommon Herald, Kirwan, the owner and managing director of Halcyon Group,  offered a free decontamination clean to any small business that had been forced to close its doors due to a Covid-19 case and needed to be disinfected and certified in order to start up again.

Despite battling cancer, Macesanu is an advocate for the Irish Cancer Society
and the Sligo Cancer Centre, tirelessly fundraising for both charities. Now studying to be a life coach to work with other cancer survivors to help them to take a positive outlook on life.

39-years-old McKenna, who has Down Syndrome and serves as The Lord Mayor of Borrisokane, raised over €22,000 to develop the local town park in Borrisokane.  Throughout lockdowns, McKenna took to Facebook daily to sing songs for his followers and encourage them to sing along.

(Editor's Note: An earlier version of this article did not list McKenna as the Tipperary selection was still pending.)

The Westmeath Examiner says that Nally, the head of drama at Mullingar Arts Centre, worked throughout the lockdown to ensure that the junior and senior stage schools stayed open for all the children that attend weekly. She also ran weekly Zoom sessions to make sure children had an escape and a sense of normality during the lockdown.

Gordon worked tirelessly every day in Ard Aoibhinn services providing support, care and daily cheer to the residents throughout the pandemic.

O'Brien founded the Arklow cancer support back in May 2009 after losing her daughter Orla, 21, from a brain tumor. She felt there was no support in her area when her family was going through such a difficult time, and she wanted to help support cancer patients and their families in Arklow and the surrounding area. Since then, O'Brien has set up a volunteer to drive program which provides transport to and from the various hospitals bringing clients for the treatments. She also set up free counseling for clients and their families. During the pandemic, and to this day O'Brien has continued to operate, bringing comfort to those during a difficult time.