Political campaigning suspended in Northern Ireland as books of condolence open in Belfast and Dublin. 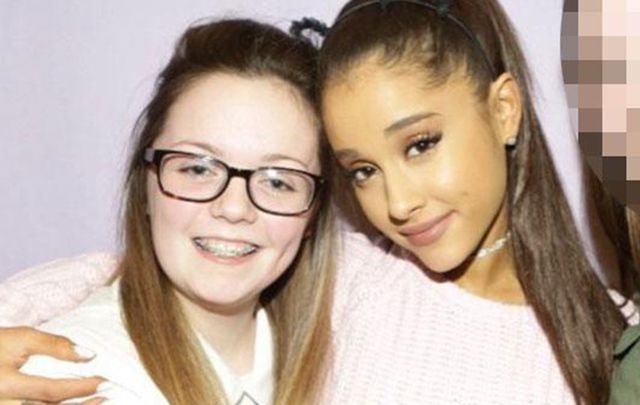 The first victim of Manchester bombing named as Georgina Callander, 18 - pictured here with her idol Ariana Grande in 2015. Twitter

Campaigning for the Westminster election across Northern Ireland has been placed on hold today as both Unionist and Nationalist politicians and politicians in the Republic of Ireland offer their condolences to the city of Manchester after last night’s tragic bombing.

It is reported at least 22 people, including children, died in the suicide bombing while 59 others were injured. The Department of Foreign Affairs is not aware of any Irish citizen who was injured in the attack on Manchester Arena, which happened as fans left the venue following a concert by 23-year-old US singer Ariana Grande.

“This savage and shocking attack was aimed at people simply going about their lives out for a night's entertainment,” said Minister Fitzgerald.

“There have always been close ties between people here and in Manchester and we stand in solidarity with our neighbours in the United Kingdom at this time of great loss.

“I know from speaking with the Garda Commissioner this morning that there is close liaison between An Garda Síochána and their UK counterparts about last night's dreadful events and this is taking place against the background of intensive ongoing cooperation with international security agencies,” she continued, adding that there has been no change to Ireland’s security assessment and no information to lead the government to believe the country is under threat.

President Higgins also issued a statement on behalf of the Irish people in which he expressed the country’s solidarity with Manchester.

"This cowardly attack on innocent citizens will have appalled all those who care for democracy, freedom and the right to live and enjoy the public space,” he said.

“Manchester has been home to the Irish and so many nationalities for centuries and at this terrible time, I want to send the people of this great and welcoming city not only our sympathy but our solidarity.

“Our thoughts in Ireland are with all of the people of Manchester and our neighbors throughout the United Kingdom at this time.”

Irish acting Taoiseach (Prime Minister) Enda Kenny has referred to the Irish ties with Manchester as “so strong.”

“When you consider last night at least, we know, 22 people went out to enjoy themselves who will never come home,” he told Irish broadcaster RTÉ’s Morning Ireland.

“In this country where we’re so used to concerts, any parent who has ever brought their young son or daughter to a concert will know that this would have been a dream night out, the weeks and the days counting down to the big event.

“This was an attack on innocence and on happiness and therefore on behalf of the people of our country, I say to all those who were unfortunately and tragically killed, injured and their families, that we as a nation hold them very closely in our hearts.”

Only three of the victims of the attack have been identified as of yet: 8-year-old Saffie Rose Roussos, 26-year-old John Atkinson and 18-year-old Georgina Callander.

The Great Manchester Police has named 22-year-old Salman Ramadan Abedi, a Mancunian of Libyan descent, as the bomber who died during the explosion. The Guardian reports that the police had not yet wished to reveal the name of the man responsible for the suicide attack but were forced to confirm when US officials passed the name to news reporters against their wishes.

A 23-year-old man has also since been arrested in relation to the attack, believed to be the bomber’s brother Ismael Abedi.

Islamic State has claimed responsibility for the attack but the inaccurate statement issued by the group with no evidence of involvement is being treated with caution.

A Book of Condolence will be opened in Dublin and in Belfast for victims of the tragedy.

“I was horrified to hear about the attack at a concert for young children in Manchester last night,” said Brendan Carr, Lord Mayor of Dublin.

“There have always been close ties between the cities of Dublin and Manchester and I am opening this Book of Condolence to let the people of Dublin express their sympathies to the families of those who died or were injured and to express our solidarity with the people of Manchester at this dark hour.”

The three Take That concerts set to start off Thursday evening at the Manchester Arena will not take place while Ariana Grande has suspended the remainder of her European tour and is said the be “broken” by events.

broken.
from the bottom of my heart, i am so so sorry. i don't have words.

The Social Democratic and Labor Party in Northern Ireland has suspended their manifesto launch while Sinn Féin has postponed the unveiling of a new billboard in north Belfast.

“The people of Ireland understand the tragic pain of loss that those in Manchester are feeling. We stand with the people of Manchester today, unbroken, unbowed and resolutely determined to defeat those responsible,” said SDLP leader Colum Eastwood, while the leader of the Democratic Unionist Party Arlene Foster tweeted “Terrorism must never win.”

I have asked all DUP candidates to suspend their campaigning today. 22 dead including children. Horrific injuries. Terrorism must never win.

The last bombing attack on this scale to take place in the city of Manchester was in 1996 when the Provisional IRA detonated a bomb in the city center. Having sent telephone warnings before the explosion, 75,000 people were successfully evacuated but the bomb squad failed to defuse the bomb in time and 200 people were injured. There were no fatalities. The perpetrators of the bombing were never caught.