Clover bravely bolted into the street in an effort to flag down help for owner. 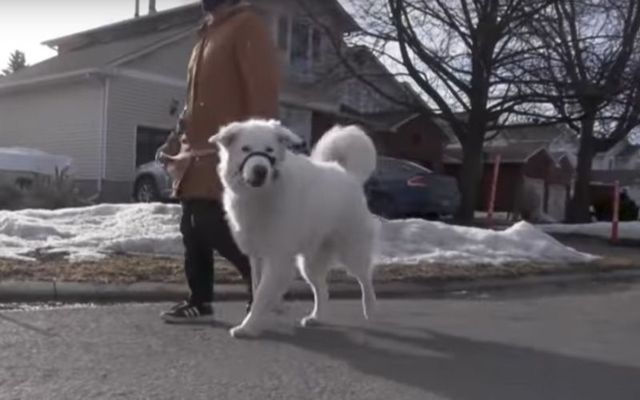 Hero dog Clover flagged down a car to help her owner who was having a seizure. YouTube/CTV News

Lucky Clover, a dog from Canada, ran into oncoming traffic to save her owner who was having a seizure.

Haley Moore, of Ottawa, was walking Clover around her neighborhood one morning last week when she suddenly fell near the sidewalk and blacked out.

Clover, a one-year-old Maremma mix, bolted into the street in an apparent effort to flag down help for Haley, the New York Post reports.

The incident was recorded by surveillance cameras and the video was posted by CTV News.

After seeing the dog in the street, Dryden Oatway, 21,  hopped out of his truck to check on Moore.

“It was really impressive, the dog actually blocked my way. She kind of backed into the road to block my truck,” he said.

“The whole time she was backing down the street she had eyes on Hailey; didn’t look away from her. She kept her distance from me but made sure her owner was okay and that was amazing.”

Clover then caught the attention of neighbor Danielle Pilon, who also came to Moore’s aid.

"Immediately I just stopped and I jumped out of the Jeep and I asked Dryden if everything was okay and he was like, "I don’t know, she fell,"" said Pilon said.

After Pilon arrived, Clover went to get more help.

"You could tell she didn’t want to leave her even when we were with her but I think it just came to her that she was like 'I need to go home to let them know she needs help,'" Pilon said.

Pilon and Oatway called an ambulance then tracked down Moore’s parents at home.

“When I got a knock on the door from the neighbors, they were frantic and our dog Clover was barking like crazy,” said Randall Moore, Haley’s father.  “To see my daughter, face full of mud, and she was incoherent, wasn’t sure where she was, it was just terrifying, it really was.”

Moore was treated by paramedics and has since recovered, but she has no idea what caused the sudden seizure.

“All I remember is waking up in the ambulance and being really confused, just like what is going on,” she said.

She added, “if this ends up happening again, I feel 10 times safer and I know she will be there for me. She’s a really amazing dog, and I love her to death.”

Clover was rewarded with a big steak for dinner.

"[My wife] Diane comes home with a couple of big steaks and I thought 'Wow, this is great, I’m getting a big steak' and she said, 'No, it’s for Clover for doing such a great job,'" said Randall Moore.