The Green Party, which won 12 seats in February's election, would help provide the Fine Gael/Fianna Fáil coalition with the required number of seats. 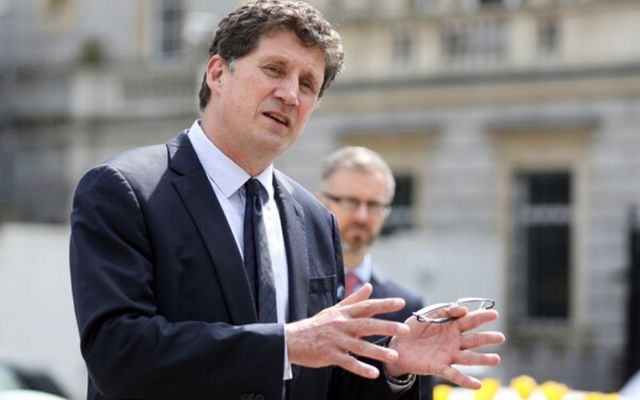 Eamon Ryan and the Green Party look set to form a government with Fine Gael and Fianna Fáil. Rolling News

Green Party TDs have voted in favor of entering into government formation talks with Fine Gael and Fianna Fáil, paving the way for a new Irish Government three months after the general election.

Fine Gael and Fianna Fáil have already agreed to go into government together, but the parties only have a combined total of 73 seats in the Dáil - seven short of the 80 needed to form a majority.

The Green Party, which won 12 seats in February's election, would help provide the coalition with the required number of seats.

The party, headed by Dublin TD Eamon Ryan, released a statement on Sunday evening confirming that its deputies had voted in favor of negotiating with Fine Gael and Fianna Fáil.

"We are conscious of the huge challenges facing any Government in the Covid-19 crisis. The party will now work with Fianna Fáil and Fine Gael to develop a deal that respects our mandate with a view to presenting that agreement to Green Party members for approval," the party statement said.

The statement said that any deal with Fianna Fáil and Fine Gael would only happen if at least eight of the 12 Green Party TDs agreed with it.

"Green Party approval of any program for government will require support of two-thirds of the Green Party voting membership."

The party also said that any deal must include a significant amount of climate action and commitment to a sustainable future in Ireland.

"Any proposal must be transformative on climate action and commit to strong progress towards a more sustainable and fairer society.

"If this is not the case, Green Party representatives will withdraw from negotiations and pursue their mandate in opposition and work to hold the government to account."

Eamon Ryan will now seek a meeting with Fianna Fáil and Fine Gael leadership to begin the negotiation process.

The Green Party last entered into Government in 2007 when it joined Fianna Fáil in an ill-fated coalition.

The party won a then-record six seats in 2007 but faced huge voter backlash in the 2011 general election following the 2008 economic crash.

The party won no seats in 2011 and just two in 2016, before enjoying its most successful ever election earlier this year.

Many feel that government formation is long overdue. It has been almost 90 days since February's election and there has been little sign of a coalition government.

Fine Gael have remained in government in the meantime since no government has been formed.

The party has seen their support surge in the interim and enjoy 35% of public support, according to a Business Post poll on Sunday.

The party won just 20.9% of the popular vote in February's election and won fewer seats than both Sinn Féin and Fianna Fáil.

However, it would appear that Fine Gael is currently Ireland's most popular party with Sinn Féin's support dropping to 27% and Fianna Fáil's dropping to just 14%.