The role of Taoiseach will be rotated between Martin and current Taoiseach Leo Varadkar in a historic deal, according to the Irish Independent. 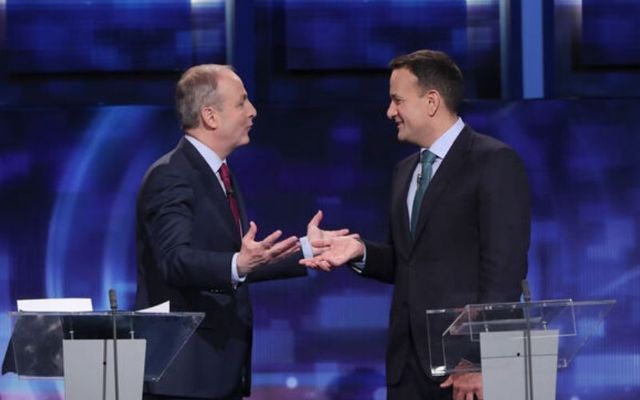 Michéal Martin and Leo Varadkar at a leaders' debate prior to the general election. Rolling News

Michéal Martin looks set to become Ireland's next Taoiseach after Fianna Fáil and Fine Gael agreed a deal for government.

The role of Taoiseach will be rotated between Martin and current Taoiseach Leo Varadkar in a historic deal, according to the Irish Independent.

Under the agreement, Michéal Martin would serve as Taoiseach first before handing power to Varadkar before the next general election.

Leo Varadkar is reportedly insisting on an equal partnership between Fine Gael and Fianna Fáil if they are to form a coalition government.

Any such agreement would be unprecedented in the history of the Irish state. It would be the first time the concept of a rotating Taoiseach has ever come to fruition and, additionally, it would lead to a coalition between parties that have been political rivals since the foundation of the Irish state.

The two parties shared a "positive" meeting on Wednesday and a deal for government could be struck by as early as next week, according to Varadkar.

Even if they do reach an agreement, Fianna Fáil and Fine Gael do not have sufficient seats to form a government. Together, the parties have 73 seats, meaning that they are seven short of the 80 seats required to form a majority.

Once they reach an agreement, the parties will reach out to several smaller political parties, including the Green Party, the Social Democrats and Labour to seek their support and form a majority.

The move represents a complete u-turn from Leo Varadkar, who seemed to rule out forming a government after February's general election.

Varadkar said that the onus was on other parties to form a government and that Fine Gael would likely be going into opposition after a disastrous general election in February.

Fine Gael only won 35 seats in the election, compared to Fianna Fáil's 38 and Sinn Féin's 37 and Varadkar seemed content to allow the two parties to form a coalition.

However, Fianna Fáil also ruled out going into government with Sinn Féin and support for Varadkar and Fine Gael appears to have surged during the COVID-19 pandemic.

Michéal Martin also appears to have a complete one-eighty after he reportedly told Leo Varadkar that he would only agree to form a coalition if he was the only Taoiseach.

He now appears to have reversed that stance in order to form a government.

Ireland's government formation was placed on the backburner during the COVID-19 crisis, but the interim government can no longer pass any legislation until the Seanad (Irish Senate) is formed.

The Irish Taoiseach nominates 11 senators to the Seanad and the acting Taoiseach (Leo Varadkar) does not have this power.

The Seanad cannot sit until the Taoiseach nominates the 11 senators.

For a bill to be passed, it must be supported by both the Oireachtas (House of Representatives) and the Seanad.

Thus, it is imperative for Irish parties to form a government in order to pass potentially vital emergency legislation related to COVID-19.