An ad for Glenstal Abbey's new book was banned by Facebook after it including a painting of a nude man by one of the Abbey's Brothers. 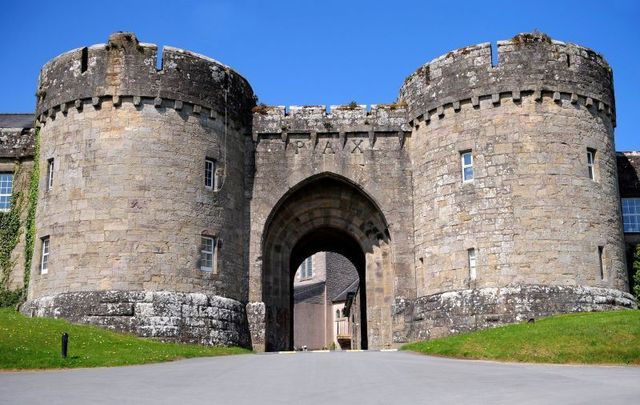 An ad for a new book about Glenstal Abbey in Co Limerick has been banned by Facebook after the social media site deemed a piece of nude biblical artwork "too sexual."

Columba Books, who are publishing 'Glenstal Abbey: Through the Seasons,' said the new book provides "a rare insight into the daily life of the community of Benedictine monks based in Glenstal Abbey, Co. Limerick."

A Facebook ad for the book featured 'The Good Thief,' a painting by the Abbey's Brother Emmaus, which depicts a naked man crucified alongside Jesus.

On October 7, The Irish Catholic Newspaper shared these images of Br Emmaus' paintings on Facebook and Twitter:

Nude paintings in a monastery library?
The IC can exclusively reveal that a new book on #GlenstalAbbey from @ColumbaBooks features a nude painting of 'The Good Thief'. Is it appropriate to hang on the walls of a library within an Abbey? You decide!#nakedmonks #nudityinthelibrary pic.twitter.com/b56lXZy3L7

The Irish Times reports that a spokesperson for Columba Books said Facebook refused to run an ad about their new book that featured Br Emmaus' painting as it was “deemed ‘too sexual’ by Facebook and against their policies.”

Facebook told Columba Books that the ad for the book “doesn’t follow our Advertising Policies which apply to an ad’s content, its audience, and the destination it links to. We don’t allow ads that feature people with excessive skin visible.”

Columba Books responded: “The ‘nudity’ in question is art pieces from a Benedictine monk at Glenstal Abbey. It’s art! Not a photo, does not feature a real person, and has been shared with permission.”

In a message entitled 'Here's what's preventing your ad from running,' Facebook again replied: "We don’t allow ads with content that features sexually suggestive posturing or that shows a lot of skin (even if it’s for an artistic or education reason) because of their highly sensitive nature. I suggest you have a look at our Advertising Policies for more details, including some do’s and don’t s.”

Read More: How was Jame Joyce's Ulysses defended when on trial for obscenity

The images were painted by artist-turned-monk Brother Emmaus, who says he depicts humans naked “to follow the naked Christ.”

Prior to joining Glenstal Abbey in 2014, Br Emmaus was a graphic designer in Los Angeles for ten years after receiving his BDes from the National College of Art and Design in Dublin. He is currently a student at the University of St Michael's College at the University of Toronto, Canada and is about to enter his third year of doctrinal studies.

“In rendering the human figure naked ‘to follow the naked Christ’, these paintings, like the Benedictine commitment to a life of daily conversion, echo the challenge to emulate the paupertas, nuditas, et humilitas Christi (the poverty, vulnerability, and humility of Christ) and become, in ourselves, transparent images of the God who made us.”

On Twitter, an employee from Columba Books shared this picture of Br Emmaus’ other painting of St. Michael the Archangel that did not make it into the book:

The mighty St Michael the Archangel from the monks of Glenstal- unfortunately didn’t make it into the final book about these amazing monks #Glenstal #monks #nude #art pic.twitter.com/APTUndj5j0

Gary O’Sullivan, a spokesman for Columba Books, told Newstalk: “I suppose it is their platform; they are entitled to do it, but I think censorship seems to be something that is increasing on social media.

“Of course we need to protect people from hate speech but this is a piece of art. We are talking about the incarnation here and this is what the artist is trying to depict.”

You can listen to O'Sullivan's comments on Newstalk here:

What do you think - should the ad have been banned or not? Let us know in the comments