An Australian Catholic school placed a black veil over a new statue of a saint offering a kneeling child a loaf of bread after it was suggested the meaning could be misinterpreted. 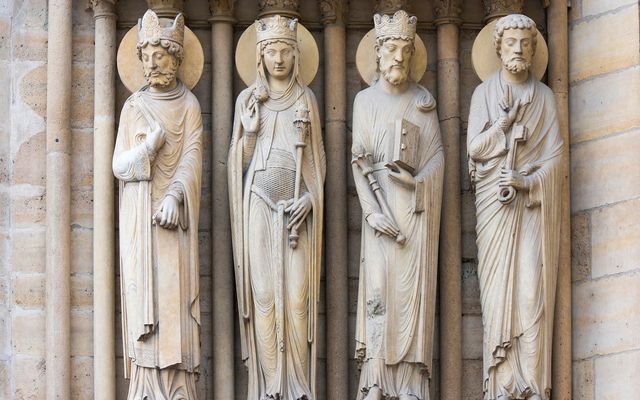 An Australian school placed a veil over a new statue of a saint offering a kneeling child a loaf of bread after it was criticized by social media users. iStock

An Australian Catholic school has been criticized for their rather “suggestive” statue.

Blackfriars Priory School, in Adelaide, Australia, was forced to place a black veil over a brand new statue commissioned for the school after the rather “suggestive” design was criticized.

The Catholic school just last week unveiled the tribute to St Martin de Porres, a Dominican brother, who is honored for his work with the poor by the piece of art depicting him offering a loaf of bread to a young boy. Unfortunately for the school, which has already faced its own sex-abuse scandals in the past few years, the kneeling child is placed at a rather suggestive angle, as the saint appears to hand to loaf of bread straight from his clothing.

The school has since apologized for the statue and has promised that the sculpture will be altered to allow for a less suggestive and unholy design.

An Australian Catholic school has been criticized for their rather “suggestive” statue.

"The two-dimensional concept plans for the statue were viewed and approved by the [school's] executive team in May but upon arrival the three-dimensional statue was deemed by the executive to be potentially suggestive," principal Simon Cobiac said in a statement.

"As a consequence, the statue was immediately covered and a local sculptor has been commissioned to redesign it.

"The sculpture is a famous depiction of the tireless work of St Martin de Porres, a Dominican brother, for the poor and downtrodden of the 16th century," Cobiac continued.

Over the past twelve years, according to ABC Australia, two former teachers at the private Australian Catholic school have been charged been jailed for sexually abusing their students.

Blackfriars was also in the news just a  little earlier this year when a fake letter was circulated to the school’s final year, telling the some 3,000-plus students that they would have to retake a biology exam. It is believed that the letter was, in fact, created by another student and not by the school authorities.

What do you make of the statue? Suggestive or are people going over the top? Let us know your thoughts in the comments section below.