Irish American pro-surfer gets bitten by shark, goes to bar instead of hospital

Irish American pro-surfer Frank O'Rourke headed for the pub after being bitten by a shark in Florida. 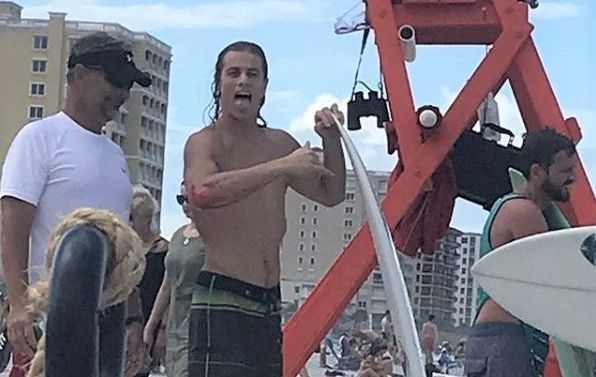 Frank O’Rourke endured the bite while surfing in Florida

Frank O’Rourke, an Irish American professional surfer, chose to go to a bar instead of the hospital after being bitten by a shark over the weekend.

O’Rourke was surfing in Jacksonville, Florida, on Saturday afternoon when the incident occurred.

Speaking with ABC News, O'Rourke said: “Shark comes out of the water and grabs onto my arm, right by my elbow. Kinda tugs a little bit and thrashes."

When the surfer emerged from the water, lifeguards tended to his arm before he decided to skip the hospital and go for a few beers instead.

Speaking with News4Jax, O’Rourke’s friend RJ Berger, who witnessed the incident, said: “He was right there behind the wave and boom – that’s when he got hit and you can see the shark’s tail splashing- it like, knocked him off his board.

"It was kind of panic, like, 'Did that just happen?'

"It kind of took him a couple seconds to, like, gather himself and realize, like, 'Wow, I just got bit by a shark,' and then we all went into the beach."

Berger added: "He immediately went to a bar 'cause he was like, 'I got bit by a shark,' and people were like, 'I'll buy you drinks.' So he went and hung out at the pier.”

On Instagram, O’Rourke said: "Wow what a weekend. I’m thankful to come away with minor injuries from a shark that bit me Saturday!"

Wow what a weekend 麗 I’m thankful to come away with minor injuries from a shark that bit me Saturday! Thank you @juvolkweis and @surfmama12 for being there by my side and @insta_puente @rjbooger @pierregulator all right there to help, I appreciate all of you and everyone else with their kind words and love! ❤️

Read More: WATCH: A 25-foot shark has been taking daily swims off the Irish coast