A group of Irish surfers headed to Ballybunion, Co. Kerry, to catch some waves but came across a magical entrance in the cliffs instead. 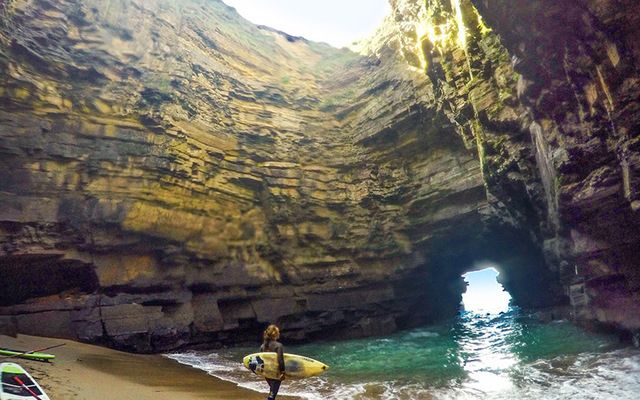 Surfing in Ireland is beautiful at the best of times with top waves, spectacular beaches, and wondrous landscapes but a group of Irish surfers got more than they bargained for recently whilst trying to catch some waves in Ballybunion. Co. Kerry.

Ballybunion is one of Ireland’s top surfing spots but on the day in question, Paul Deering and his friends from the company Irish Adventures were met with tamer waters that but their surfing on hold.

Intent on finding themselves some more action, the surfers packed up again and headed along the coastal Kerry road to see if they could find a better spot for some Irish west coast surfing.

Stopping at a secluded beach, the group went out for a paddle on their boards and noticed a gap in the cliff face that seemed to be leading deeper inside under the ground.

Drawing closer to explore the entranceway in the Kerry cliffs opening up into a remarkable cavern, easily one of the most beautiful little hideaways we’ve ever seen along the Irish coastline.

Even more remarkably, the entrance to the stunning cave had a wave which allowed you to ride the water right through, one of the most spectacular ways we can think of to arrive in a magical secret cave.

Deering captured some beautiful footage of the cave as well as his entrance aboard a wave on his Gopro and it has us hunting for a great wetsuit and surfboard to get ourselves there.

Have you ever come across a hidden gem such as this cave while trekking off the beaten track in Ireland? Let us know about your adventures in the comments section.