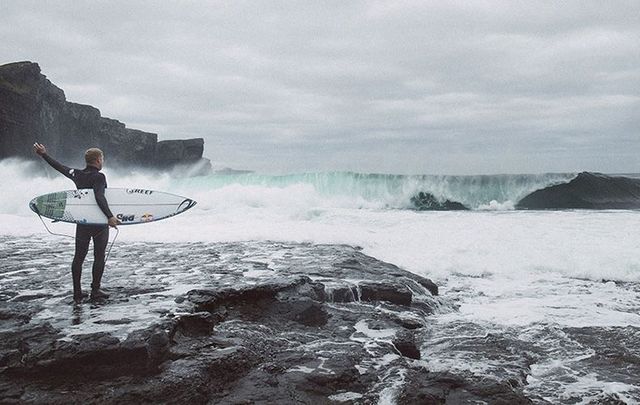 You can almost feel the surf coming off the Atlantic! A still from Mick Fanning's Irish Crossroads. RipCurl / YouTube

Champion surfer Mick Fanning has put together a video montage of his trip to Ireland and it is breathtaking.

The 35-year-old, whose father is Irish, has won the World Surf Championship three times. Fanning made this video with help from Aussie wetsuit manufacturers Rip Curl.

You might have heard of him after he went viral a couple of years ago when he survived a shark attack in South Africa.  "I'm just lucky it wasn't my time," he said seemingly unconcerned.

And although there are no sharks, unlike in his native New South Wales, he feels right at home in Ireland.

Fanning takes in the waves of the West of Ireland coasst.

“You go to other countries, say you go to Indonesia or Hawaii, you always feel like a tourist because you don’t have those deep-seated roots. where here I feel a sense of home in a way, it’s my heritage, my Dad was born here, the closest family we have is pretty much from Ireland. It’s always been a place to go and you always feel so welcome.”

But incredibly for such a keen surfer, this was the first time he’s ever grabbed a board and gone surfing in the Emerald Isle.

“I was looking at charts and I just saw there was so much swell coming to Ireland and I was like yeah! - it’s now or never really! So I just booked a ticket, jumped on a plane and here we are.”

And the waves off Ireland’s Wild Atlantic Way are certainly impressive!