Red Pandas are classified as an endangered species and there are less than 2,500 remaining in the wild. 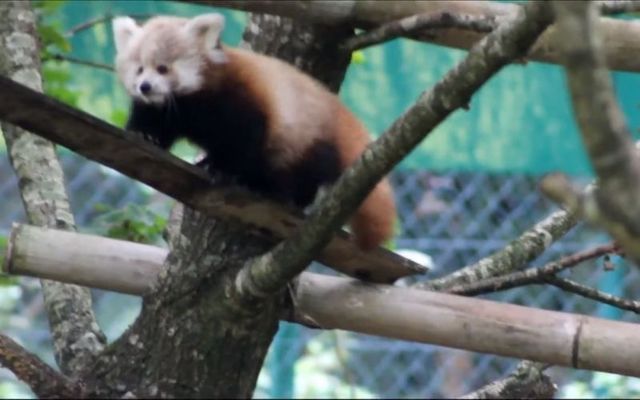 The red panda cubs were born in June and have just started to leave their nesting box. Fota Wildlife Park YouTube

Fota Wildlife Park in County Cork has unveiled two twin red panda cubs who were born in June and have now started to venture outside their nest box.

The red panda is classed as an endangered species by the International Union for Conservation of Nature, which estimates that there are less than 2,500 red pandas left in the wild.

The baby pandas were unveiled just before International Red Panda Day, which takes place on the third Saturday of September every year to raise awareness, educate and fundraise to help conserve the endangered species.

The twin cubs were born to nine-year-old mother Bonnie and two-year-old father Grga on June 13 this year.

The red panda, located in the Asian Sanctuary of the wildlife park, is one of the most popular attractions in the park.

Julien Fonteneau, lead ranger at Fota, said: "We’re delighted to be able to announce the births of the twin cubs, the Red panda is definitely one of the favourite species with the public. These births give us the opportunity to highlight the conversation work that we do.

"These births also provide us with the opportunity to educate the public and visitors about Fota Wildlife Park’s participation in the international breeding programmes for the many species that are endangered or threatened in the wild."

Fonteneau said that the recent mild weather encouraged the pandas to leave their nesting box for the first time after months of sleeping and feeding.

Fota Wildlife Park is now calling on the public to name the two cubs and be in with a chance of winning a year-long conservation pass. The pass entitles the holder to enter the park with up to three adults or six children on an unlimited basis throughout the year and is worth €190.

Read more: Lions, and tigers and bears, oh my! -- Family day out at Fota Island and luxury nights stay at the Garryvoe Hotel, County Cork