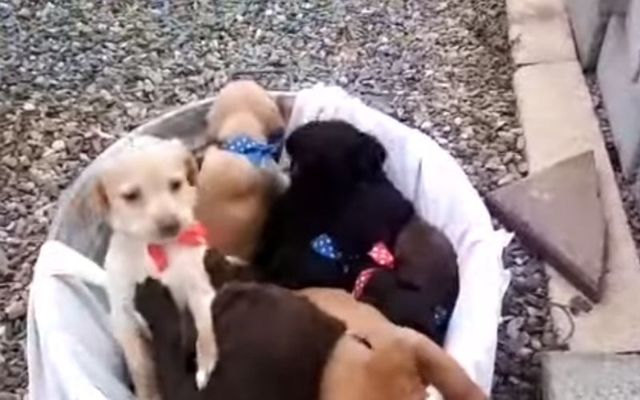 An Irish family in Limerick had a lockdown to remember after their dog gave birth to an astonishing 16 puppies in the joint-largest delivery ever recorded in Ireland.

The Killing family in Crecora, County Limerick, had been planning to take their dogs Bella - a labrador/border collie - and Archie - a springer spaniel/Irish setter - to be neutered at the vets earlier this year but were forced to abandon the plans with the outbreak of COVID-19.

The family instead worked to keep 15-month-old Bella and Archie apart by dressing them in nappies, separating them, and applying Vick's Vaporub.

Their attempts obviously failed as Bella gave birth to a brood of 16 puppies in July, equalling the record for the largest delivery ever recorded in Ireland.

While one puppy sadly died, the Killing family was still able to welcome 15 adorable and healthy puppies into their midst.

Mary Killing, the family's mother-of-five, told the Irish Mirror that ten of the puppies were born before midnight on July 25, while the remaining six puppies were delivered the following morning. There were eight boys and eight girls in total.

"I was in absolute shock. The vet had told us she was going to have eight to 10 puppies. So having 15 was quite phenomenal. It’s a record I think," Mary Killing told the Irish Mirror.

Mary Killing was watching a re-run of Game of Thrones when Bella delivered the first of the record-equalling litter.

She said that the dog began panting heavily and delivered the pup right onto her lap.

She leapt into action, steering the dog to a comfortable spot under the stairs where a duvet had been set up for her.

All of the pups were born without the assistance of a vet.

The Killing family had to place the puppies in an open suitcase the next morning to count them properly since the new-born pups were keen on exploring, Mary Killing said.

"We had to get a suitcase the following morning to put them into to count them as they were wriggling all over the place. It was just phenomenal. We were in awe. They are all different colours – and some of them have the mark of Zorro on their head, some have it on their chest," she told the Mirror.

The COVID-19 pandemic has forced Mary Killing to work at home and, fortunately, she has been able to simultaneously work and care for the puppies over the last two months.

All but one of the puppies are being given to family and friends this weekend. Meanwhile, Walter, the first puppy born in the litter, is remaining with the Killing family.

Mary Killing said that it will be emotional watching the puppies leaving for their forever homes.

She said she isn't taking any money for the dogs, stating that her only wish is to see them loved and treated like one of the family.