Fota Wildlife Park in Co Cork is calling on the public to help choose a name for the baby Indian Rhino, the first ever to be born in Ireland. 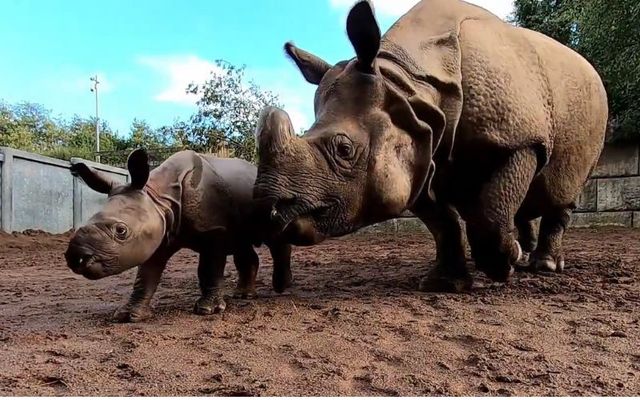 Foa Wildlife Park in Co Cork welcomed an Indian Rhino, the first ever to be born in Ireland, on September 19. Fota Wildlife Park, YouTube

Fota Wildlife Park in Co Cork welcomed the first-ever Indian Rhino to be born in Ireland in September.

The unnamed male calf was born at Fota Wildlife Park on September 19 after a 16-month gestation period to mother Maya and father Jamil.

It was only the second of three baby Indian rhinos to be born in any zoological institution this year.

**A first for Fota Wildlife Park!** We're delighted to announce the birth of a baby male Indian rhino, who was born on 19th Sept to Mum, Maya and Dad, Jamil. This is the first Indian rhino birth for Fota and Ireland #IndianRhino #Conservation
Images by @DKanePhoto pic.twitter.com/DqiszpfepQ

The Indian rhino is listed as a vulnerable species by the International Union of Conservation of Nature (IUCN), with just 3,300 rhinos living in the wild.

Aidan Rafferty, the lead ranger at Fota Wildlife Park, said in a statement that both mother and calf are doing well since the birth, adding that they hope the calf will be the first of many.

"Maya is very protective and is constantly by his side," Rafferty said in a statement.

"We're delighted to see the little calf running around and playing. He is an absolutely gorgeous animal, and he's getting stronger and more curious every day."

Rafferty said the calf is currently not on view to the public as he is staying inside the rhino house with his mother and gradually getting accustomed to the outside world.

"The best opportunity to see him is later in the afternoon. As he gets older and stronger, he'll be introduced to the remainder of the rhino habitat, which features grass meadows, mud pools, and a lake area," he said.

As yet on limited view to the public as he’s inside the Rhino house with his mother and is gradually getting accustomed to going outside for brief periods. The best opportunity to see him is later in the afternoon. See link for more & help suggest name! https://t.co/072iANgKXN pic.twitter.com/QKhpbUvnDz

Fota Wildlife Park is inviting the public to help name the new Indian rhino calf. You can submit your name suggestion online here to be in the chance of winning an annual Conservation pass.