Michael Barasch said that at least 11 clients have died from the virus, but that he suspects that figure to be much higher. 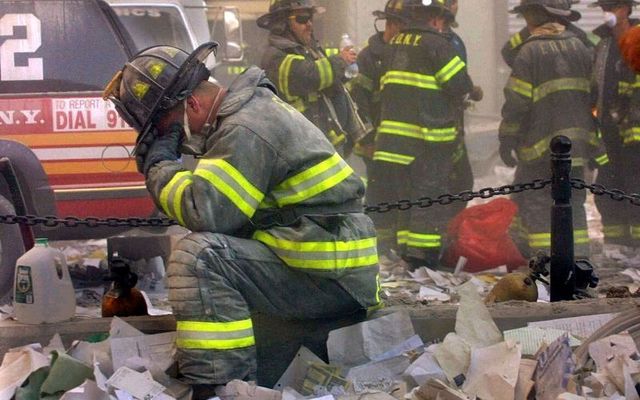 A member of the FDNY breaks down during the 9/11 attack on the World Trade Center. Getty

First responders during the 9/11 terrorist attacks on the World Trade Center are at much greater risk from COVID-19 than most people, according to a prominent lawyer who represents the 9/11 community.

Michael Barasch, a Managing Partner at the Barasch McGarry law firm that represents around 20,000 survivors, said that at least 11 clients have died from the virus, but that he suspects that figure to be much higher.

Barasch told IrishCentral he, sadly, loses about one client a week to cancer or some respiratory illness, but the rate has at least doubled since the outbreak of COVID-19.

"I’m now seeing a spike in deaths. I don’t have exact figures yet, but we’re seeing at least twice as many deaths since the outbreak of this virus.

"We are waiting for death certificates for dozens of my clients."

Barasch said that the spike in deaths is almost certainly linked to underlying conditions related to the 9/11 attacks.

He said that the significant amount of concrete, dust, asbestos, and lead in the air following the collapse of the World Trade Center contributed to underlying health conditions in survivors.

Barasch said that 68 forms of cancer were found in the lung tissue of first responders and construction workers who served in the immediate aftermath of the attack in addition to numerous respiratory conditions, including asthma, reactive airwaves disease, pulmonary fibrosis, and chronic bronchitis.

These underlying health conditions make survivors of the 9/11 attacks more vulnerable to COVID-19, according to the lawyer.

Around half of Barasch's clients are Irish American and he said that a sizeable amount of his clients currently reside in high-risk settings like nursing homes given that it is almost 20 years since the fall of the World Trade Center.

He is calling on elected officials to relay the message that 9/11 survivors are more at risk from COVID-19.

"The most important thing that could be done would be to have a consistent message sent out from our leaders saying that 9/11 survivors are more vulnerable from the virus and need to stay home.

"Don’t give a false impression that everything is ok, or that you don’t need a mask or that wearing a mask isn’t manly. It is imperative that you protect yourself."

Barasch is currently advocating for a coronavirus victims compensation fund for the families of essential workers, similar to the Victims Compensation Fund awarded to families who lost loved ones during the 9/11 attacks.

More than $7 billion was distributed among families who lost loved ones due to the 9/11 attacks and to victims undergoing medical treatment related to the toxins from the World Trade Center.

He said that the present debate is complicated by the definition of "essential workers".

"Where do you draw the line on what defines an essential worker? What about a subway cleaner? Or transit workers? Or sanitation workers? Can you imagine if they were told to stay home? Garbage would pile up and you’d have rats everywhere and a spread of other diseases. The place would be a wreck.

"That’s the question for the victim’s compensation fund; where do you draw the line and say ‘the payment is for these people, but not for those people.’"

The lawyer said that politicians can start drawing up budgets for a compensation fund as soon as essential workers can be defined.

However, he is not optimistic that the fund will become a reality.

"I don’t think it’s going to happen. I think some people will look at this as a New York thing because New York has lost more people than anyone else.

"I can’t say that I envisage it, but I’m hopeful and I’ll fight for it."