Fears in Ireland that lockdown looms

There are fears in Ireland that with Omicron rapidly spreading, new restrictions will be imposed in the New Year, despite the denials of government chiefs before Christmas. 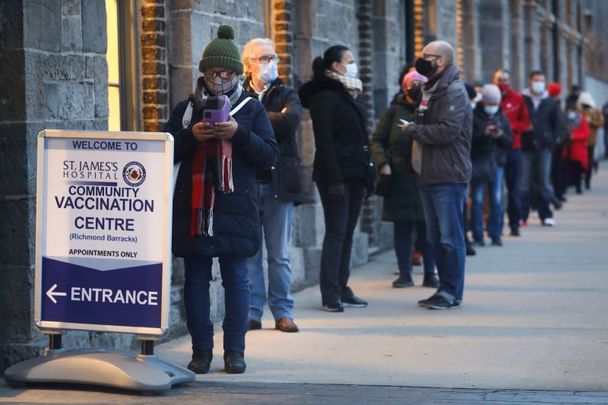 December 24, 2021: People queuing outside Richmond Barracks in Dublin, as the clinic continues to roll out booster vaccinations just one day before Christmas RollingNews.ie

The concern rose as the chief executive of the Health Service Executive (HSE) Paul Reid said on Tuesday that there is “no doubt now” that Covid-19 is “absolutely running rife in our communities.”

Reid said there is an “unparalleled level of testing volumes coming forward,” and the HSE is seeing a positivity rate of up to 50 percent recorded in recent days in the community.

On Tuesday morning, there were 521 patients with the virus in hospital, an increase of 59 people from Monday’s figure. Of those, 92 were in ICU, up one.

Current government advice allows people from four households to gather indoors, but with new cases topping well in excess of 10,000 per day for a number of days around Christmas Chief Medical Officer Dr. Tony Holohan earlier appealed to people not to meet anyone from other households indoors.

Holohan said, “We know that this variant is more transmissible than even the highly transmissible Delta variant. As such, please do not socialize or meet indoors with people from other households.”

He also issued a stark warning to shoppers to avoid the annual post-Christmas sales and to shop online instead.

Holohan pleaded with the public to queue outside and leave any retail environment that does not feel safe and that is not adhering to the public health guidance, such as implementing social distancing measures and queuing systems, limiting numbers in-store, and ensuring staff wear masks correctly covering nose, mouth, and chin.

In addition to the mandatory public precaution measures, cases of staff illness forced the cancellation of some pantomimes.

Leopardstown’s four-day Christmas horse racing festival had to be held behind closed doors because Covid prevented many sales, hospitality, and security employees from attending work.

On Monday, a bank holiday, thousands avoided indoor pubs and opted instead for open-air activities such as family walks and sea-surfing.

Although Covid illnesses requiring hospital treatment rose from the high 300s a week ago to the 500s on Tuesday, they remained below 100 – 92 on Tuesday – in the intensive care units. This gave credence to Holohan’s assertion that booster vaccines offered good protection against infections with the Omicron variant.
However, his warnings against queuing outside shops for the post-Christmas sales caused some alarm among business owners.

He told the Irish Independent, “It feels a lot like 2020, and the last two weeks have felt like we are going back down that route.”