Father Edward J. Flanagan, the Irish born founder of Boys Town, is one step closer to sainthood this week. 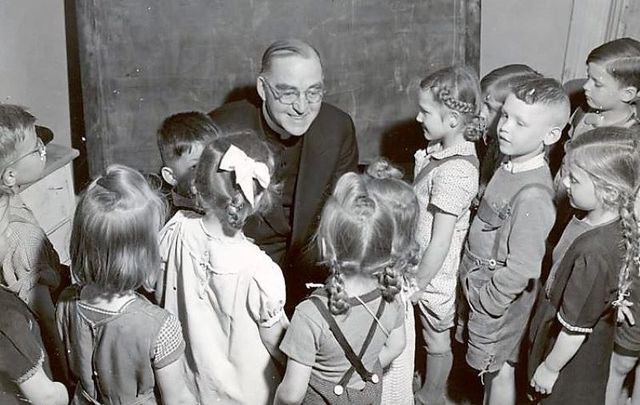 Father Flanagan, the Irish founder of Boys Town, is one step closer to sainthood this week. @BoysTownMission, Facebook

The case for Father Flanagan's canonization progressed this week

Father Edward Flanagan, the Irish priest who founded Boys Town in the US, is one step closer to becoming a saint.

Read More: On This Day: Father Flanagan, founder of Boys Town, is born in Ireland

The Catholic News Agency reports that a ‘posito,’ or a summary of the records collected by the Archdiocese of Omaha, was presented on July 22 at the Congregation for the Causes of Saints.

Also presented was a  letter of support from the Archbishop of Omaha George Lucas, who said in a statement: “It has been a privilege to offer my support for the cause of Father Edward Flanagan at each stage of this process.”

“I was able to share with Cardinal Becciu the encouragement offered to all of us in the Church during this challenging time by the virtuous life and work of Father Flanagan.”

Father Flanagan’s journey to sainthood officially began when the Archdiocese of Omaha opened his case in 2012. Their initial phase concluded in 2015 as their documents were sent to the Vatican.

In 2017, Cardinal Angelo Amato, who was prefect of the Congregation at the time, signed a decree that affirmed the validity of Omaha Diocese’s initial phase.

Now, if all are in agreement of the validity of the posito and materials that were presented this week, Father Flanagan will be advanced to “venerable,” the next step towards sainthood.

Father Flanagan, who was born in Co Roscommon and emigrated to the US before becoming a priest, is most famous for founding Boys Town in Nebraska.

The Boys Town website says of Father Flanagan: "He believed that children had rights and should be protected. These rights and this protection covered everything from basic necessities like nutritious food, clean clothes, and a bed to sleep into child labor laws that prohibited employers from forcing children to work in dangerous conditions for unfair pay. Father Flanagan also sought to close reformatories and other juvenile facilities where children were abused and literally held prisoner."

Now, Boys Town has 80 locations around the world while the original Boys Town cares for an estimated 80,000 people annually.

At the bidding of President Harry S. Truman, Father Flanagan also traveled to war-torn Asia in the 1940s to advise on child and family care in the midst of conflict.

Steven Wolf, president of the Father Flanagan League Society of Devotion and vice-postulator of his cause, told CNA: “He completely immersed his life in the gospel, and lived it. He completely poured his life into saving these kids nobody else wanted to deal with.”

With the founding of Boys Town, Father Flanagan “built a society around them, and put love, God’s love, in the middle of their circumstances and helped them to become whole and complete people.

“He could see the face of Christ in every child, and he wanted to help every child, not just be successful citizens, but also be saints.”