The wife of Senator Robert F. Kennedy is fasting for 24 hours alongside 50 other members of the Kennedy family to protest Trump “zero-tolerance” immigration policy. 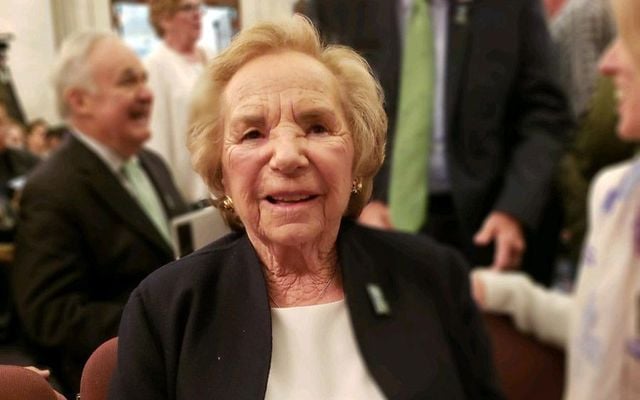 The 90-year-old widow of Senator Robert F. Kennedy, Ethel Kennedy, is standing with the immigrant families facing President Trump’s “zero-tolerance” immigration policy at the Mexican border by fasting for 24 hours in protest. Ethel Kennedy joins with 50 other members of the Kennedy family, including her daughter Kerry Kennedy, President of RFK Human Rights; and her grandson Congressman Joe Kennedy III as she pledges to donate the money she would have spent on food to charity organizations working on the grounds to protect families.

RFK Human Rights, which Ethel Kennedy founded in memory of her husband, has joined with La Unión Del Pueblo Entero, the Texas Civil Rights Project, and Neta to establish Break Bread Not Families, a 24-hour fast and prayer chain that will run for 24 days in support of the 2,400 children separated from their parents because of Trump’s hardline policies.

“We want to find a way for people who can’t go down to the border to actually do something themselves at home that is concrete and creates change, and this is what we’re calling on them to do,” Ethel’s daughter Kerry Kennedy told the Boston Globe.

Read more: The Kennedys are making a major political comeback

Join @RFKHumanRights & activists around the country in a chain hunger fast in solidarity with families ripped apart by @realDonaldTrump's cruel immigration policies. Learn what you can do: https://t.co/tXLQPiyGVV #breakbreadnotfamilies pic.twitter.com/LqkM44SKYA

Starting last Saturday, June 23, the fast will run through 24 days with different elected officials, influencers, and members of the Kennedy family taking up the mantle each day. RFK Human Rights has also called on members of the public to join them and donate the price of their food for the day to Break Bread Not Families.

While Trump signed an Executive Order ordering that children not be separated from their families after feeling the heat from both sides of the aisle, Ethel Kennedy believed that it wasn’t enough to protect families attempting to cross the border.

Stating that it was “not a time to declare victory and go home,” after the order was signed, she continued in a statement to say: “Generations of Americans did not toil and sacrifice to build a country where children and their parents are placed in cages to advance a cynical political agenda.”

“For children being starved of contact with their parents, the irreparable harm inflicted by our government multiplies every single day kids remain separated from their moms and dads,” added her grandson Joe Kennedy.

If my grandma is willing to step up and fast to #EndFamilyDetention, you better believe you’ll find me right by her side. #BreakBreadNotFamilies https://t.co/RX0hoTpWs0

“Through the Break Bread Not Families Fast, we hope to underscore the urgency our nation faces to confront this moral crisis perpetuated within our shores.”

As well as the Kennedy family themselves, the fast has attracted other famous faces including Alec Baldwin, Alfre Woodard, Keegan-Michael Key, and Evan Rachel Wood.

You can find more information on Break Bread Not Families here.

Do you agree with the Break Bread Not Families group's actions? Let us know in the comment section below.

Related: Immigration, The Kennedys, US Politics