Enoch Burke was arrested at Wilson's Hospital School on Monday morning after disobeying a court order and "sitting in an empty classroom" at the school. 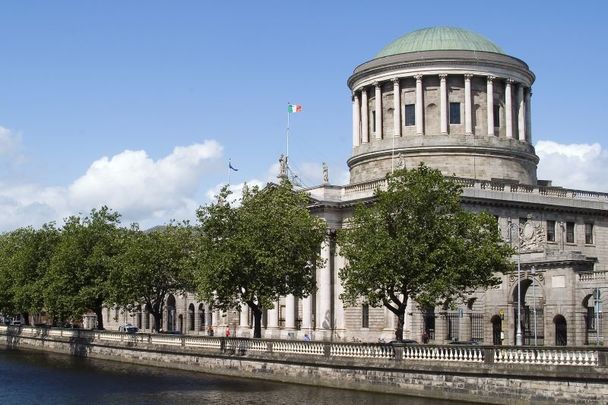 The Four Courts in Dublin, the principal seat of the Supreme Court, the Court of Appeal, the High Court, and the Dublin Circuit Court. Getty

Schoolteacher Enoch Burke has been charged with contempt of court and committed to Mountjoy Prison after failing to comply with a High Court injunction preventing him from attending or teaching at his secondary school in County Westmeath.

Enoch Burke was arrested at Wilson's Hospital School, on Monday morning, Sept 5, after disobeying the court order and "sitting in an empty classroom" at the school.

He will remain in Mountjoy Prison until he purges his contempt or until further orders from the High Court, Mr. Justice Michael Quinn told the court on Monday.

Burke was placed on paid administrative leave from the school in mid-August pending the result of a disciplinary process. The disciplinary process commenced after Burke publicly voiced his opposition to the school principal's request to address a transitioning student by the pronoun "they" and by a different name.

Burke, who does not agree with transgenderism, allegedly challenged the school principal on the subject at a school function in June.

The High Court has heard that Burke believes a belief system has been forced upon the students at the school, while he also claims that the request is a breach of constitutional rights.

The school has denied that anyone is being "forced" to do anything.

Burke continued to attend the school after being placed on administrative leave, prompting the school board to obtain a temporary High Court injunction preventing him from attending the school campus.

Rosemary Mallon, who represents the school's board of management, told the High Court that Burke was clearly in contempt by continuing to attend the school after the injunction was obtained. Mallon said the school sought the injunction as a coercive order rather than a punitive one, simply hoping to keep Burke away from the school during the disciplinary process.

Mallon said it was with "regret" that the school was seeking an order of committal.

She said Burke had made it clear that he would continue to attend the school, leaving the school with no choice but to proceed with its application to have him found in contempt.

Representing himself, Burke said he loved his job and loved to teach, adding that he could not comply with the school's request to "call a boy a girl", which was something he could not do in good conscience.

He said the school board was not at liberty to place a teacher on administrative leave except for cases of gross misconduct, adding that complying with the order would be to admit that sticking to his beliefs in male and female qualifies as gross misconduct.

"I cannot do that, transgenderism is contrary to my Christian belief," Burke told the High Court.

He said he respected the law and the court system but added that he could not comply with the court order as doing so would make him a hypocrite.

Burke said he could not purge his contempt because he believed it was something he considered to be a breach of his Christian beliefs.