Elizabeth Coppin was forced to work without pay under cruel conditions in three different Magdalene Laundries. 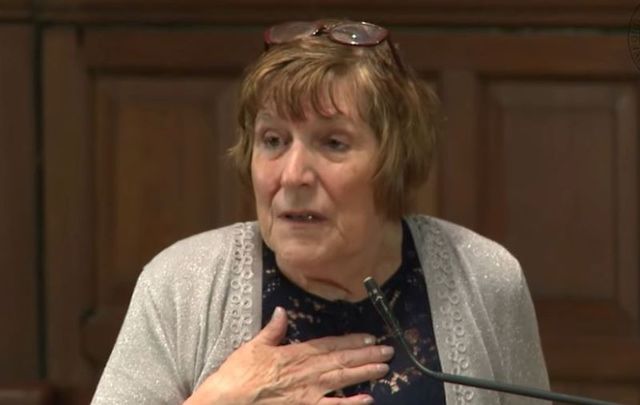 Elizabeth Coppin at Oxford Union in May 2019 speaking about her experience with Ireland's Magdalene Laundries. OxfordUnion, YouTube

The UN's Committee Against Torture has agreed to hear the case from Elizabeth Coppin, 70,  regarding her years spent working in three of Ireland's Magdalene Laundries.

The remarkable determination of a 70-year Irish old woman to get justice for the abuse she experienced in three Magdalene Laundries looks set to have far-reaching implications for survivors of Irish institutions all across the world.

Survivors as far away as the United States, Canada, Australia, and Great Britain, as well as hundreds more in Ireland, will be keeping a keen eye on the case taken by Elizabeth Coppin to the United Nations Committee Against Torture (UNCAT) for violations of her human rights.

It emerged this week that the UN committee has accepted the landmark case brought by Ms. Coppin, who was forced to work without pay for six days per week at three different Magdalene Laundries in Cork and Waterford.

Ms. Coppin’s case mirrors those of many other survivors living overseas. She emigrated almost as soon as she got the chance, after an entire childhood locked up in institutions, and has never been able to get justice from the Irish authorities for the brutality she experienced.

She was released from St. Mary’s in Waterford in 1968 and emigrated to the United Kingdom the following year. She lives in Cambridgeshire, England, where she married and had a family, but has said that her experiences in Irish institutions have never left her.

"It stays with you for life. You’re overprotective of your children, especially, I was, of my daughter. You’re frightened in case anything happens to them. I deliberately set out not to get married in the Catholic Church, I deliberately didn’t bring them up Catholics, I don’t regret that for one moment,” she said two years ago.

Her “crime”, if you could ever call it that, was to be born to an unmarried teenage mother in Co Kerry in 1946. She was committed to an industrial school in Tralee when she was just two years old, under an order to be held there until her 16th birthday.

An estimated 30,000 women, not all of them single mothers, were locked up in Magdalene Laundries in the 19th and 20th centuries. About 10,000 were forced into slave labour in the laundries between Irish independence in 1922 and the closure of the last one in 1996.

Although then Taoiseach Enda Kenny made an emotional apology to survivors on behalf of the Irish State in 2013, and those who applied have received ‘ex-gratia’ payments from the State, many believe they have never uncovered the full truth or justice for the abuse they experienced.

UNCAT has given the Irish Government until May 20 next to respond to the case brought by Ms. Coppin relating to her detention in industrial schools and laundries between 1951 and 1968.

From age 14, she spent four years working without pay in two laundries in Cork and one in Waterford. She has recalled being forbidden to speak and forced to sleep in a bolted cell during her time at a Magdalene Laundry in Cork City.

After spending two years in a Magdalene laundry in Cork City, Elizabeth managed to escape in 1966 (aged 16). She was caught and transferred to another laundry in Cork before moving to a similar institution in Waterford.

Ms. Coppin has accused the Irish State of failing to “investigate, acknowledge, or address” the abuse she experienced during her time in the three institutions where she effectively worked as a slave.

Like many survivors, she received an award from the Residential Institutions Redress Board, in 2005, with no admission of liability from the Irish authorities.

Ms Coppin has also fought hard for justice over the years. Statements she made to the Gardai in 1998 and 1999 were not acted upon and a High Court case she brought against both the State and the religious orders was struck out in 2000, due to the long lapse in time.

It has taken a further 20 years for her case to reach the UN Committee Against Torture, the first case of its kind involving religious-run institutions in Ireland, and survviors’ groups are keeping a keen eye on the outcome.

Read More: The last Magdalene Laundry in Ireland closed its doors in 1996

Speaking to IrishCentral, human rights lawyer Maeve O’Rourke said the case is of huge interest to survivors as it raises issues of accountability and the Irish State’s failure to adequately investigate institutional abuse in the laundries.

“The thing about the UN Committee Against Torture is that it is totally focused on human rights,” said Dr. O’Rourke, a specialist from NUI Galway.

“It’s an appropriate place for Ms. Coppin to bring her claim. The Irish State has provided money, but it hasn’t responded to the violations of her human rights. Basically, this case is about accountability. She wasn’t able to go through the Irish courts because she had signed waivers in order to receive her ‘ex-gratia’ payment.

“The State has continued to refuse to acknowledge that her human rights were violated, which is causing her continuing degrading treatment. The Irish State is continuing to claim that there is no evidence that systematic ill-treatment or criminal abuse happened.”

The Irish State has argued that UNCAT should not hear the case because Ms. Coppin’s detention occurred long before Ireland signed up to the UN Convention Against Torture in 2002.

She has made allegations of arbitrary detention, beatings, forced labour, human trafficking, humiliation, denial of education, denial of identity, denial of a family life, neglect, starvation, and religious denigration during the 16 years she was locked up in Irish institutions.

In her case to UNCAT, she says that the Irish State has failed to investigate her complaints about the abuse she suffered and says that her human rights have been breached under articles 12 to 14, and 16, of the UN Convention Against Torture.

“By taking this case, Elizabeth is claiming that the State is continuing her abuse by continuing to hold records from her time in institutions,” said Dr. O’Rourke.

Dr. O’Rourke said Elizabeth’s determination in bringing the case to the Committee Against Torture should highlight the importance of delivering the truth and justice to survivors, even after they have received compensation.

She said it highlighted the need for a national archive which would keep records of what went on in institutions across Ireland in the 20th century.

She also urged Magdalene laundry survivors who may have emigrated to North America or the United Kingdom to take up the Government’s compensation scheme.

“I would say, as well, if there are any women out there who haven’t applied to the Department of Justice Magdalene Laundry ex-gratia scheme, they can still put in their applications. The scheme is still open to survivors,” she told IrishCentral.