Dublin and its new twin city Kyiv will work together to strengthen and develop common interests and solutions to challenges. 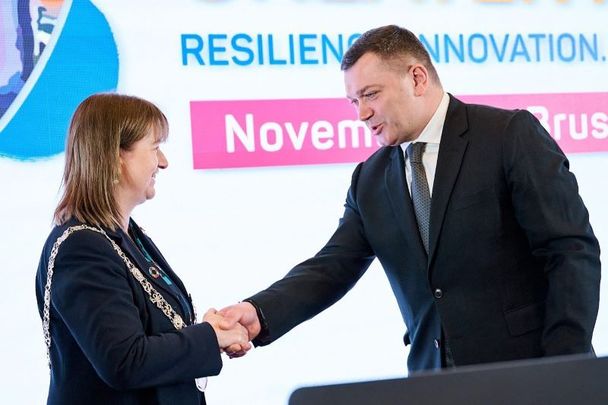 Dublin, Ireland has entered into a twinning agreement with Kyiv, Ukraine.

The Lord Mayor of Dublin Caroline Conroy and the First Deputy Head of the Kyiv City State Mykola Povoroznyk signed the Dublin Kyiv Twinning Agreement on November 28 during the Lord Mayor’s visit to the 2022 Kyiv Investment Forum in Brussels.

Conroy said: “I am delighted that we can now officially begin the process of twinning with the city of Kyiv.

"I met with Mykola Povoroznyk today and conveyed to him the support of the people of Dublin.

"I know everyone in Dublin, and indeed across the country, hopes that this unjust war will be brought to an end as soon as possible. Our thoughts are with our friends in Kyiv.”

Huge honour to sign a twinning agreement with Kyiv on behalf of the citizens of Dublin.We stand in solidarity with the people of Ukraine against the cruel and illegal invasion by Russia. ⁦@DubCityCouncil⁩ ⁦@LordMayorDublin⁩ ⁦@GeraskoLarysa⁩ ⁦@UkraineIreland pic.twitter.com/HeeWaOnPz9

The signing of the document gives effect to the Emergency Motion passed at the Dublin City Council meeting on March 7 this year to express the solidarity of the people of Dublin with the people of Kyiv.

On April 27, Dublin City Council received a letter from Mayor Klitschko of Kyiv thanking Dublin for its support. Klitschko said: "We believe the twinning arrangement will strengthen our union between the City of Dublin and the City of Kyiv."

Dublin City Council said that following Monday’s signing, the two cities will work on ways in which the city of Dublin can express its solidarity with the people of Kyiv and how it will support the Irish Government in its humanitarian work with refugees from Kyiv. The two cities will work together on identifying areas where they can strengthen and develop common interests and solutions to challenges.

The agreement between Kyiv and Dublin includes the wish for development and fruitful cooperation in a wide range of economic, cultural, tourism, and other areas of mutual benefit. They will together promote European values of democracy, freedom, and human rights and will promote peaceful coexistence in Europe.

The two cities will also endeavour to provide mutual support in emergency situations by providing humanitarian assistance and political support.

Aside from Kyiv, Dublin is twinned with San Jose in the US, Liverpool in the UK, Barcelona in Spain, and Beijing in China.

Kyiv is twinned with nearly 40 international cities, including Chicago in the US and Edinburgh in Scotland.