The Office of Public Works said it received an application in January for a rally to take place at the Papal Cross in the park over the weekend of May 7 and 8. 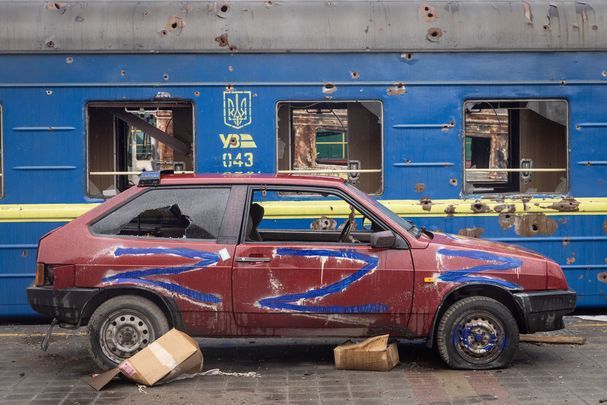 A car scrawled with the symbol "Z" at a former Russian base, the central train station in Trostyanets, in Ukraine. Getty

An Irish Government agency has refused permission for a pro-Russian rally scheduled to take place in Dublin's Phoenix Park this weekend.

The Office of Public Works said it received an application in January for a rally to take place at the Papal Cross in the park over the weekend of May 7 and 8.

Members of the Russian community in Ireland had planned to gather at the Papal Cross over the weekend to commemorate "Victory Day", marking Russia's defeat of the Nazis in the Second World War.

The OPW said organizers of the rally failed to provide a signed indemnity form, submit an event safety management plan, or provide relevant insurance cover for the event.

Organizers also failed to meet with the OPW and An Garda Síochána about the event.

Earlier this week, Ukrainians in Ireland called on the Irish Government to ban pro-Russian rallies due to be held over the weekend to mark Victory Day.

A support group for Ukrainians in Ireland said Ukraine and Russia have a shared history of fighting the Nazis but accused Russia of "deliberately trying to distort the historical truth by downplaying the contribution of other nations to the struggle against Nazism".

The group described a pro-Russian motor cavalcade scheduled to take place on the M4 and M6 motorways on May 8 "humiliation of human dignity and ethnic values which are at the core of our identity".

The group added that Russians living in Ireland were abusing freedoms that they would not receive at home by choosing to stage pro-Russian rallies.