The Dublin Pride celebrations took a very different shape for 2020 due to coronavirus restrictions. 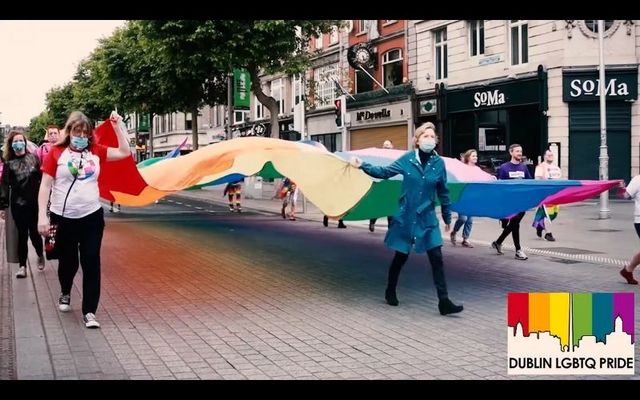 Some members of the LGBTQ community carried the Pride flag down Dublin's O'Connell Street on June 27. Dublin LGBTQ Pride Festival and Parade, YouTube

The virtual parade raised awareness about discrimination faced by members of the LGBTQ community and also honored frontline workers in the fight against the coronavirus.

The theme of this year's Dublin Pride Festival was "In This Together" in light of the current global health crisis and organizer's called this year's festival "one to remember."

Sunday's virtual parade was the culmination of the Digital Dublin Pride Festival, which began on June 18 and ran for 11 days. The virtual festival featured a whole host of daily events like quizzes, pet shows, and debates.

A small group representing the LGBTQ community kicked off the festivities on Sunday by carrying the Pride flag down O'Connell Street at sunrise.

A convoy of vehicles representing various frontline workers followed the marchers down Dublin's main thoroughfare, including representatives from the HSE, the Dublin Fire Brigade, and An Garda Síochána.

The virtual parade kicked off later in the day at 2 pm, which you can watch back on here:

Lord Mayor of Dublin Tom Brabazon led the digital parade along with frontline workers across Dublin, while Paul Ryder and Eddie McGuinness hosted the online festivities.

Festival organizers also encouraged people to post photos and videos of their own DIY Pride parties and parades with the hashtag #VirtualPrideParade.

There were numerous parties and parades across the city in the absence of the official parade at a time when small indoor gatherings are permitted once again.

Joe Dowling, CEO of Dublin Pride, said that the online celebrations raised awareness about discrimination against the LGBTQ community.

He said that while it is very disappointing not to be able to take to the streets, the festival was still able to achieve its goals and raise awareness about issues faced by the LGBTQ community.

Dowling told the Irish Independent that Ireland had come a long way in its treatment of the LGBTQ community but that members of that community still faced systemic bullying and hate crimes.

"We've come a long way but that doesn't mean that there isn't still bullying or that people aren't still the victims of violence.

"That still happens. In particular, a lot of trans youth are the victims of violence and attacks so it's still an issue."

The Digital Dublin Pride Festival concluded with a live concert from the Round Room of Dublin's Mansion House the George Bar, a prominent gay bar in Dublin, as has been a tradition at recent Pride festivals. Kodaline and Lesley Roy were among the standout acts to perform at the concert.