The People Of Ireland Against Fuel Prices Protest has published its six demands ahead of its protest scheduled for Dublin City on April 11. 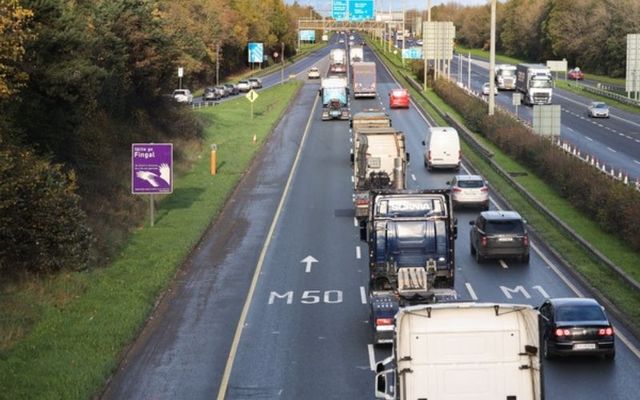 November 24, 2021: Trucks heading towards the M50 as they depart Dublin through the Port Tunnel, as the Irish Truckers Haulage Association Against Fuel Prices groups lead a convoy of vehicles into Dublin City Centre. RollingNews.ie

Irish truckers plan to lock down Dublin City when they stage a protest over rising fuel prices in mid-April.

The People Of Ireland Against Fuel Prices Protest, previously known as the Irish Truckers and Haulage Association Against Fuel Prices group, has organized a protest for Monday, April 11, stating that "Dublin will be in complete lockdown" throughout the demonstration.

They are also calling on Minister for the Environment Eamon Ryan to "step down with immediate effect", for the carbon tax to be scrapped, and for both green diesel and home heating oil to be capped at 65c per liter.

"Dublin will be in complete lockdown and for as long as it takes until our demands are agreed upon by Government," the group said on Facebook.

"We have picked Monday the 11th as it will not interfere with school kids getting to and from School. This will also allow for Bus Operators to attend.

"We would advise if you have an appointment in Dublin that week that you reschedule where possible. For those making essential journeys please give extra travel time."

The group has also advised people taking part in the protest to bring "food and refreshments".

The protest has been organized during the Easter holidays so as to not disrupt children getting to school, the group said in a statement on Facebook.

The Irish Truckers and Haulage Association has been calling for reduced fuel prices since November when protests brought Dublin to a standstill. They also shut down parts of Dublin's Port Tunnel during a similar protest in December.