The US finally lifted the travel ban it had in place since March 2020 on November 8, leading to many excited travelers at Dublin Airport this week. 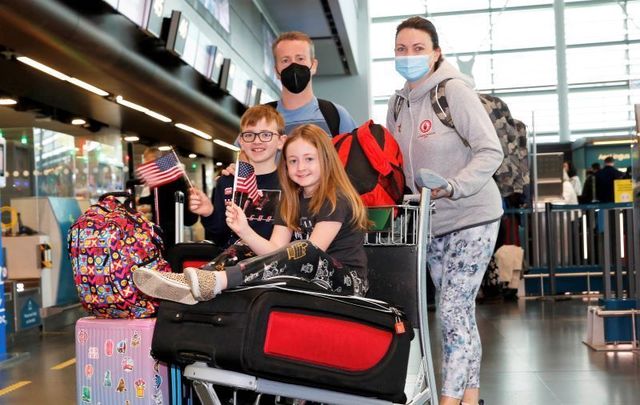 November 8, 2021: Laren and Ryan McShane from Tyrone with their children Malachy and Orla check in at the Aer Lingus desk in Dublin Airport before flying to New York as Aer Lings welcomed customers back on board its long-haul service to the United States. RollingNews.ie

Tears welled in Liz Quinn’s eyes at Dublin Airport as she prepared to travel on one of the first full passenger flights between Ireland and America after the 20-month pandemic break.

Quinn, from Listowel. Co. Kerry, was flying to Boston to visit the daughter she hadn’t seen since Christmas 2019.

She told the Irish Independent how it was heartbreaking to be separated from her daughter by the Atlantic for so long. “It’s very hard as a parent, very hard.”

She was so looking forward to the reunion that she added, ”I’d nearly swim there now at this stage.”

We’re delighted to start reconnecting you with the people and places you’ve been missing 💚#LetsFly ☘️ pic.twitter.com/Zpzo4LQjqj

All flights out of Ireland to the U.S. on Monday, the first day they resumed since March 2020, were full, with emotional passengers looking forward to reunions with relatives or preparing to meet work colleagues face to face for the first time.

One of these was Ian Howard, from Co Cork. His trip to Boston meant a first in-person meeting with work colleagues since starting a new job earlier this year. The 49-year-old joined a U.S. pharmaceutical start-up, which aims to reduce the prices of oncology drugs, and was one of the company’s first employees in Europe.

He said, “I’ve been Facetime-ing and Zoom-ing with colleagues, so it’ll be great to meet them.  I started in May this year, so since then I haven’t managed to meet them face-to-face.”

He heard rumors in summer that travel to the U.S. might be allowed to resume from early November. He guessed it would come into effect from the second week of the month and booked his flight seat in July.

“I work in planning so maybe it rubbed off,” he said.

Almost every one of the 70 Aer Lingus flights between the two countries this week is fully booked. That means 10,000 going out of Ireland to the U.S.