Patches of extensive forests along Galway Bay were exposed during a 2014 storm that marked Ireland's Atlantic rim 7,500 years ago. 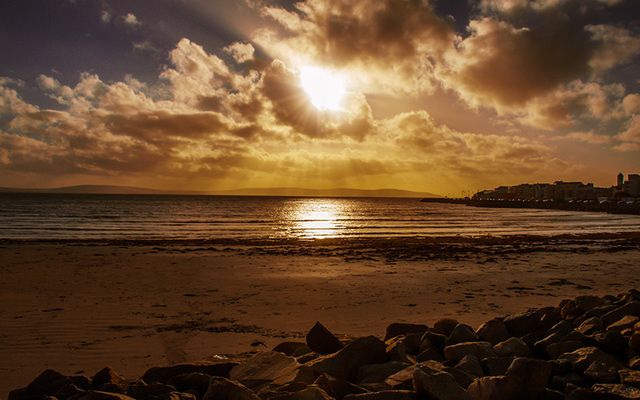 Powerful winds and the pounding sea from the storms stripped away layers of sand and stone on the shoreline in 2014 ultimately uncovering parts of a “drowned” woodland along the north Galway coastline west of Spiddal.

Geologist Professor Mike Williams said the forest, once populated by people, wolves, and bears, extended out into lagoons and marshlands that pre-dated the formation of Galway Bay. Oak, pine, and birch stumps surrounded by extensive root systems are for the most part undisturbed. A carpet of peat was also exposed in the same location and was formed by organic debris which once covered the forest floor.

“These trees are in their original growth position and hadn’t keeled over, which would suggest that they died quite quickly, perhaps in a quite rapid sea-level rise,” said Professor Williams.

He explained that up until 5,000 years ago, Ireland experienced a series of rapid sea level rises, and forests along the western coastline were flooded and recycled into deposits of peat up to two meters thick, which were then covered by sand. He told the Irish Times that sea level would have been at least five meters lower than it is today and most west coast sand-dune systems can be dated back to a “leveling” off period in sea level change about 5,000 years ago

He has found tree stumps in south Mayo and Clare, as well as Galway, which has been carbon-dated to between 5,200 and 7,400 years ago.

Professor Williams, who is due to publish a paper on his findings in the ‘Irish Journal of Earth Sciences’ with his colleague Eamon Doyle, believes locations, where the stumps can be found, should be given a special area of conservation status.

“Come the summer and the sands will have covered this over again until the next experience of extreme weather,” he said.