Dog was tortured before being killed by Dublin thugs, owner reveals

A GoFundMe to get justice has been launched after Dublin man Kevin Treacy's beloved dachshund dog Keisha was cruelly tortured and left to die. 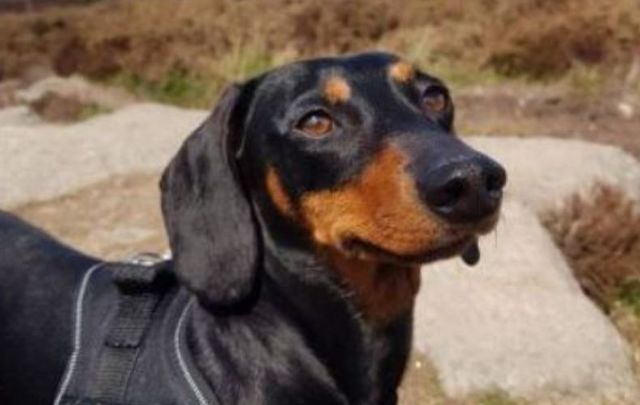 A GoFundMe has been launched to help get justice for Keisha the Dublin dachshund pup. GoFundMe

Dublin man Kevin Treacy has shared the shocking story of how his beloved dachshund pup Keisha was strangled with a charger cable and left in a bag to die at Dublin's Grand Canal Dock.

Treacy, from the Bawnogue area of Clondalkin in Dublin, was so distressed by the horrific way he lost his beloved dog, Keisha, that he phoned into the RTÉ radio show, LiveLine. He explained that the four-year-old dachshund had gone missing on September 7 but nothing could have prepared him for how the small dog was tortured on killed.

When the dog initially went missing, having escaped out a downstairs window, Treacy launched a search party. He put up missing posters and liaised with local animal shelters and the police. He even offered a $1.16k (€1k) reward for the return of his dog. However, he did not get any information on the pup's location.

Two weeks later, Keisha's body was found in a sports bag dumped in the Grand Canal, at the 11th lock, in Clondalkin. A charger cable had been wrapped multiple times around her neck. The cable had also been used to secure the handle of the bag so that the small dog had no chance of escape.

Tierney arrived on the scene shortly after the body had been discovered by a local. He told LiveLine "When I realized it was Keisha in the bag, I just dropped to my knees by the banks of the canal.

“I was completely distraught and haven’t been able to eat or sleep since it happened. I was always expecting to get her back and never imagined that any person could do something so heinous and evil – my whole life has been turned upside down.”

The owner believes his dog was killed in "horrific" circumstances and he is "determined to get to the bottom of what happened and am not letting it go."

A GoFundMe has been established with the view of offering a reward for information or "hard evidence" that could lead to her killers being identified.  Tierney said he considering hiring a private investigator.

The bereaved owner said he had Keisha cremated over the weekend.

Karen Tierney, also the dog's owner, told Liveline she believes those responsible were local as their missing posters were being taken down.

"We don’t know how long she was in that canal and we believe she was held somewhere beforehand because if she had been roaming the streets, she would’ve been found or come home. We believe someone was hiding her from us."

She also told RTÉ that someone had posted a video of Keisha's remains been found on TikTok which she found a "very distressing thought”.

She said “I am so shocked that anyone was capable of doing this to our baby. She was an innocent little thing, so happy and playful.

“Every day I have woken up crying and I’m on the verge of tears all the time; it’s just heartbreaking. We just want justice for her. People have been so kind and supportive.

“I can’t believe the cruelty. All I have is visions in my head of how she died and how she suffered. I’m trying to remember the lovely times and the playful little girl she was but it’s very hard.

“I know that she probably died screaming and terrified and looking for her Daddy and her Mammy."

The Irish police told the Irish Independent: "Gardaí based in Clondalkin Garda Station received a report of a missing dog that was later located deceased on September 23, 2021, in the Grand Canal area of Dublin. No arrests have been made and investigations are ongoing.”

Listeners to Liveline were shocked by the Tierneys' story and shared their condolences and horror with messages like "boils my blood", "this is just heartbreaking" and "bound to escalate further if not apprehended".

One wroten "Every serial killer in history tortured animals first before progressing to human torture / murder. Shocking if society does not act.”

Another agreed, saying "People who do this are capable of anything. A serious threat to both humans and animals."

Visit the fundraising page for justice for Keisha here.