The refusal to allow Irish woman Margaret Keane's family to include an Irish language phrase on her gravestone was "discrimination on basis of Irish race," a UK court said. 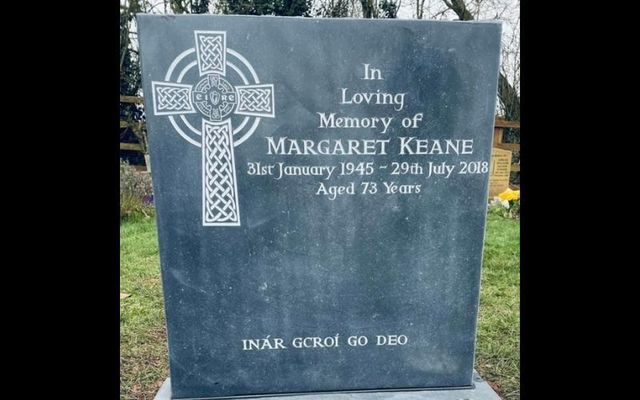 Margaret Keane's family finally won their battle to include an Irish-language phrase on her headstone in Coventry. Message to Margaret, Facebook

The family of Irish woman Margaret Keane has welcomed a judgment that found "discrimination on basis of Irish race" after they were refused permission to include an Irish language phrase on her gravestone.

When Irish woman Margaret Keane died in Coventry in the UK in 2018, her family wanted to honor her Irish heritage by including the Irish language phrase "in ár gcroíthe go deo" (in our hearts forever) on her gravestone at St. Giles in Exhall in Coventry.

The Chancellor at the church, however, refused to allow the Irish language phrase without an English translation on the gravestone, kicking off a long legal battle for Keane's family.

While Keane's family won their legal battle earlier this year, and the Irish language inscription was installed in time for St. Patrick's Day 2021, it wasn't until June 16 that the Arches Court of Canterbury published its judgment which said that the refusal was unreasonable under the common law and in breach of the family’s right not to be discriminated against under the Human Rights Act and Article 14 of the European Convention on Human Rights.

The judgment states: “..we find that the effect of the Chancellor’s decision was to discriminate directly against the Appellant on the basis of her race” and that “…an assumption seems to have been made that viewers of the inscription, realising that it was in Irish, would conclude that it was a political slogan, which we have found not to be based upon evidence or any other rational footing.

"The requirement for translation was, therefore, based upon Irishness, a racial characteristic."

The judgment also directs all Diocesan Chancellors to review their Churchyard Regulations to ensure that they are not discriminatory, particularly in relation to non-English inscriptions.

Posted by Message To Margaret on Wednesday, March 17, 2021

The judgment by the three appeal judges has been handed down almost a year to the day since the family launched an appeal to overturn a lower court Judgment dated 6 May 2020 made by Chancellor Stephen Eyre QC which refused the Irish-only inscription on the basis it could be regarded as a “slogan” or “political statement” in “English-speaking Coventry."

Legal action was taken on the family’s behalf free of charge by Irwin Mitchell solicitor Caroline Brogan and barristers Caoilfhionn Gallagher QC and Mary-Rachel McCabe of Doughty Street Chambers. The appeal was supported by Conradh na Gaeilge i Londain, who intervened in the proceedings and were represented by Raj Chada of Hodge Jones & Allen and barristers, Tim Moloney QC of Doughty Street Chambers, and Blinne Ní Ghrálaigh of Matrix Chambers.

Margaret Keane was originally from Athboy, Co Meath in Ireland and her family wanted to reflect her Irish heritage in their tributes to her when she died, never expecting it would take three years and a long court battle to do so.

Our beautiful mum Margaret Keane passed in 2018, she finally gets her headstone on Wednesday with an Irish only inscription ☘️? pic.twitter.com/hrRUiLGwJI

Margaret’s daughter, Bez Martin, said: “It’s quite overwhelming, but mum always taught us the difference between right and wrong and so we always knew in our own hearts that we were doing the right thing by challenging discrimination and asking to be treated the same as the other parishioners.

“There are other headstones in the same churchyard with inscriptions in Hebrew, Latin, and Welsh, without any English translation.

"There is even a headstone which includes 'In our hearts forever' in Welsh, the same message we had asked for in Irish-only, but had been refused and so it was very painful knowing that we were being treated differently just because the inscription was to be in Irish.

“We feel vindicated that the appeal judges have recognised this and that we, just like the other parishioners, now have a loving memorial message in our mother language.

"We also always knew that our case went beyond our own family and we hope that we have given a voice to the otherwise unheard”.

Margaret’s daughter Caroline Newey, who brought the appeal, said: “As soon as we received the Judgment, the first person I had to tell was my mum and I went straight to her beautiful resting place at the Meadow.

“I was able to sit beside her gravestone and tell her that she is in our hearts forever and that we hope that our long battle all the way to the highest appeal court in the ecclesiastical system will mean that no other family has to go through this.

"The appeal court not only allowed us to have 'In our hearts forever' in Irish-only on our mum’s grave, but they also sent a very clear message about respect for identity and inclusivity."