The hospitality and events industry in Ireland is facing a Christmas crisis in the wake of new COVID restrictions. 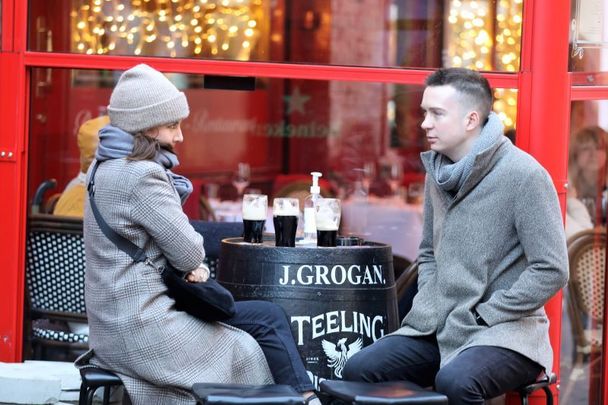 December 4, 2021: Members of the public enjoy some hospitality on South William Street in Dublin, the morning after the Government announced the introductions of new Covid-19 restrictions that began on December 7. RollingNews.ie

As the Covid-19 battle forced nightclub closures and an entertainment industry cut back to 50 percent attendances in halls from Tuesday of this week, a new unrelated threat to health service’s struggle also hit Ireland.

A number of Covid-19 vaccination and testing centers across the country were forced to close on Tuesday as Storm Barra  buffeted most of Ireland with high winds and heavy rain.

Covid-19 testing and vaccination centers were closed in status red weather areas, mainly Cork, Kerry, and Clare, and canceled appointments were being rescheduled as quickly as possible.

Many centers at the three Munster counties were closed, but there were also closures in Dublin, Galway, Leitrim, Limerick, Mayo, Meath, Sligo, and Tipperary.

They were an added problem, following the government’s announcement last Friday of returning Covid restrictions that will bring Christmas crisis for many businesses.

Due to the ongoing high level of Covid-19 transmission in the community and concerns about the Omicron variant, the government introduced measures which mean bars and restaurants must now offer table service only, permit no more than six customers to sit at a table, prevent patrons from booking multiple tables, and ensure there is a distance of at least one meter between tables.

Nightclubs were also ordered to close, with the restrictions due to remain in place until January 9.

With audiences at live events now halved, just a few weeks after the industry reopened in late October, several groups and musicians canceled gigs because they would take a financial hit.

This prompted a meeting early this week between representatives of the hospitality and entertainment sectors and Taoiseach Micheál Martin and Public Expenditure and Culture Minister Catherine Martin.

Micheál Martin said after the meeting that he did not want to see concerts and events being cancelled as a result of the new restrictions.

“We don’t want people taking a hit...for organizing concerts and events. We want artists still performing and I believe the nature of targeted supports to be such that we can enable concerts to take place. Also that it would be viable for participants and that’s where the supports should be targeted,” he said.

Tanaiste Leo Varadkar confirmed that supports for business would be discussed at Tuesday’s Cabinet meeting.

The government is expected to announce funding for businesses affected by the crisis in coming days. Restaurants have already reported thousands of pre-Christmas cancellations.

Elaine O’Connor of the Events Industry Association of Ireland said everything from community charity events, Christmas markets and light shows, ice skating, and Santa’s grottos would be impacted.

“My struggle is to think of an event that isn’t affected,” she said.