Ireland's Minister for Foreign Affairs Simon Coveney is set to brief his EU counterparts on Russian plans to hold artillery drills 240km off the coast of Cork between February 3 and February 8. 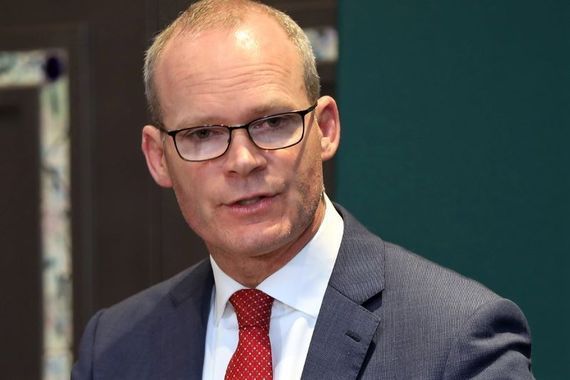 Simon Coveney, Ireland's Minister for Foreign Affairs and Minister for Defence, has made it clear that Russian live-fire naval exercises 240km off the Irish coast are "not welcome".

Coveney is set to brief his EU counterparts on Russian plans to hold artillery drills 240km off the coast of Cork between February 3 and February 8.

The exercises will take place in international waters but within the Irish exclusive economic zone (EEZ).

Coveney told reporters in Brussels that he had made it clear to Russian Ambassador to Ireland Yuri Filatov that the exercises are not welcome.

"This is not a time to increase military activity and tension in the context of what is happening with and in Ukraine at the moment," Coveney said.

"It’s important that I brief my colleagues on those intentions."

In compliance with legal requirements, Russia informed the Irish Aviation Authority (IAA) in advance about its plans to hold live-fire training exercises.

The IAA confirmed that the exercises will not pose a risk to civilian aircraft, which will be diverted away from the area.

Coveney admitted that Ireland didn't have the power to prevent the drills from happening since they are taking place in international waters. However, he said that he made it clear that they are not welcome.

"Russia, under international law, can take military exercises in international waters, but the fact they are choosing to do it on the west borders of the EU, off the Irish coast, is something that is in our view not welcome and not wanted right now, particularly in the coming weeks," Coveney told reporters.

Coveney is in Brussels for a scheduled meeting with EU foreign ministers about escalating tensions between Russia and Ukraine.

He said that it is an "important day" for EU foreign ministers to send "two very clear messages" about the escalating tension.

"First of all, a clear message and ask of Russia to defuse tension in the context of their activities on the borders of Ukraine and give reassurance to the rest of the world in terms of their intentions," Coveney said.

"Secondly, a strong message of unity from the EU that should Russia decide to invade Ukraine militarily, that there would be very severe consequences of that action from an EU perspective in terms of sanction and restrictions that would follow very quickly, that I think would be the most comprehensive that the EU has put together in many decades."

Russia has amassed troops on the Ukrainian border in recent weeks, while the West continues to send arms and munitions to Ukraine, leading to fears of an imminent war.

Last week, talks in Geneva between US Secretary of State Anthony Blinken and Russian Foreign Minister Sergey Lavrov over the deteriorating situation in Ukraine ended without agreement.