The Irish Defence Forces confirmed they are monitoring The Yantar, a Russian vessel with spy capabilities that has been spotted in waters near Mayo and Donegal. 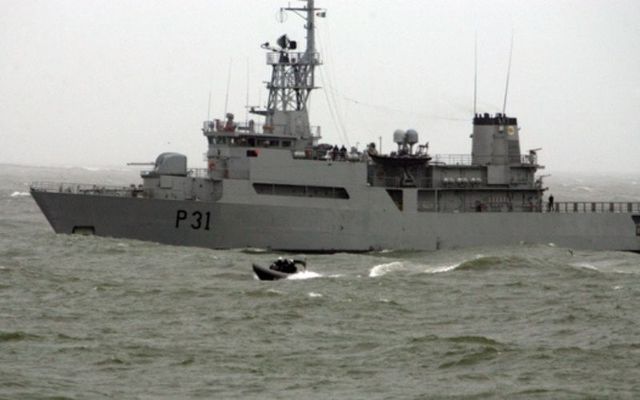 An Irish Naval vessel in 2007. RollingNews.ie

The Irish Naval Service is currently monitoring a 350 ft Russian spy ship that was spotted off the west coast of Ireland on Wednesday morning.

The Irish Defence Forces are aware of the presence of the Russian vessel, named The Yanatar, off the west coast of Ireland, the Irish Times reports.

"Óglaigh na hÉireann [Irish Defence Forces] can confirm that the Irish Naval Service is aware of the Russian ship Yantar transiting in the Irish exclusive economic zone off the west of Ireland," the statement said.

"This ship is transmitting on the automatic identification system and is outside Irish territorial waters."

The Óglaigh na hÉireann spokesperson said that the ship's activity was in line with the  UN Convention on the Law Of the Sea.

The ship reportedly traversed the seas between North Mayo and West Donegal in a zigzag fashion in the early hours of Wednesday morning, indicating that it was searching for something using sonar.

There is at least one undersea communications cable located in the area that the vessel was sighted, while the ship's behavior has been described as highly suspicious by military sources.

"Based on the activities of vessels of that specificity and based on the fact there has been a certain amount of activity off the west coast where we have cables that carry internet traffic between Europe and the Atlantic, it is suspected the Russians are showing some undue attention to that area," Power told Newstalk.

"This has been alleged before in other circles. As far as I am aware, I think the vessel is just outside territorial waters."

Independent TD Cathal Berry, who previously served as an intelligence officer with the Irish army ranger wing, told the Sunday Times that Russia clearly regarded Ireland as the weakest link in Europe's defenses.

"This type of activity has been going on wholesale for the last few years. It highlights the importance of having a properly resourced naval service and air corps to adequately monitor our areas of maritime responsibility," Berry told the Sunday Times.

"We are Europe’s weakest link in defense. We have no sonar capability. We have no military radar so we can’t even monitor our skies. No self-respecting nation would allow this to happen. Russia has discerned this weakness for themselves and is now taking full advantage."

The Russian ship "The Yantar" carries a crew of 60 and reportedly carries extensive surveillance equipment.

The vessel has been serving the Russian Navy since 2015 and is operated by Russia's Main Directorate of Underwater Research.

The ship is officially an oceanographic research vessel but is capable of attaching spy equipment to undersea internet cables, while the ship is also used for cable cutting and intelligence-gathering missions.

Constructed in the Baltic port of Kaliningrad, the Yantar is the mothership for manned and unmanned submersibles, including two three-man submersibles capable of diving up to 20,0000 ft.

The Yantar carries devices for deepsea tracking and additionally carries equipment used to connect to top-secret communications cables, such as military cables installed by NATO on the ocean floor.