Ireland's Department of Foreign Affairs has confirmed that there are Irish passengers quarantined on the Diamond Princess cruise ship, which is currently docked in Japan amidst a coronavirus outbreak onboard. 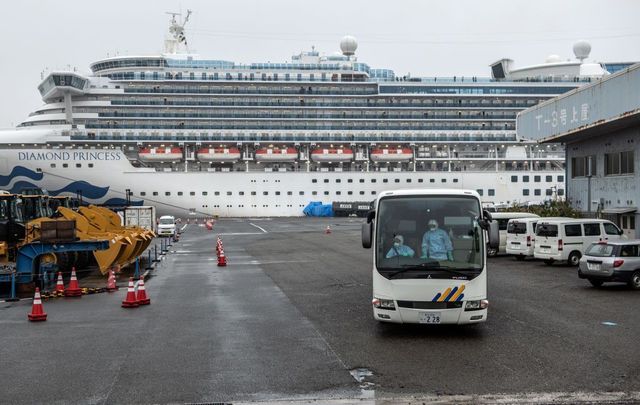 US citizens are evacuated from the Diamond Princess. Getty Images

Ireland's Department of Foreign Affairs has confirmed that there are Irish passengers on board the Diamond Princess cruise ship in Japan where over 450 cases of coronavirus have been confirmed.

The Diamond Princess cruise ship has been docked at the port of Yokohama since the beginning of February after an outbreak of the rapidly-spreading virus.

Ireland's Department of Foreign Affairs confirmed that there are Irish passengers on board the ship, but didn't confirm whether there were any plans to evacuate them.

The Department said that it was "examining its options."

Read more: 1,000 workers in Dublin told to work from home amid coronavirus scare

On February 15, Jan Swartz, the president of Princess Cruise lines, provided an update on testing for coronavirus:

Diamond Princess Update:
President Jan Swartz provided a video update to the guests and team onboard Diamond Princess as the Japanese Ministry of Health begins to share their draft plans for disembarkation. #DiamondPrincess pic.twitter.com/cASOUu4zgs

"While the final plans have not been confirmed to us, the Japanese government has informed us that they may start a new testing process for guests beginning February 18. There's a limit to the number of tests the Japanese government can complete each day. So testing all of our remaining guests could take a few days to complete."

Swartz said it will take at least three days for test results to be returned.

Japanese authorities have confirmed another 99 cases of coronavirus on the ship, bringing the number of diagnosed cases to 454.

The US Government has begun to evacuate American citizens who were trapped on board the ship.

The first plane carrying American passengers from the Diamond Princess landed at Travis Air Force Base in California on Sunday night.

The passengers will be kept in quarantine for 14 days at the airbase before being allowed to leave.

The US Departments of State and Health and Human Services announced that 14 of the passengers tested positive for the virus during the evacuation process. The 14 passengers were allowed to fly in isolation from other passengers.

"After consultation with HHS officials, including experts from the HHS Office of the Assistant Secretary for Preparedness and Response, the State Department made the decision to allow the 14 individuals, who were in isolation, separated from other passengers, and continued to be asymptomatic, to remain on the aircraft to complete the evacuation process," the agencies said.

All passengers were "closely monitored" throughout the flight, according to a joint statement from the departments.

More than 600 people are already in quarantine in the United States following earlier evacuations from Wuhan, the Centers for Disease Control and Prevention said.

In total, there have been over 70,000 confirmed cases of the virus worldwide and it has killed over 1,700 people. Most of the cases have been diagnosed in China and the Chinese authorities pointed to a slowing death rate as proof that their methods of dealing with the outbreak are working.