Checkpoints to be relaunched across Ireland ahead of holiday weekend

Operation Fanacht, a system of checkpoints on Ireland's roads to ensure no non-essential travel is occurring, is set to relaunch across Ireland from April 28 - May 4. 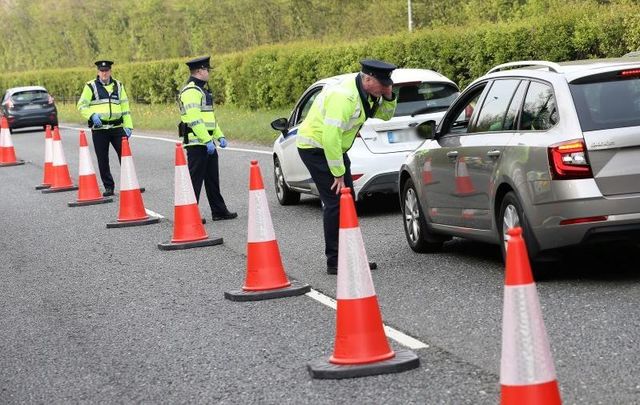 Operation Fanacht will be in effect from April 28 - May 4. RollingNews.ie

Operation Fanacht, an extensive network of checkpoints across Ireland’s roads, is set to launch again tomorrow, April 28, ahead of the long holiday weekend in Ireland.

Read More:  "Everyone must stay at home" - new restrictions for Ireland effective tonight

Operation Fanacht was first launched across Ireland ahead of the Easter holiday weekend in a bid to ensure people were adhering to the most recent set of restrictions to help curb the spread of coronavirus.

An Garda Síochána, Ireland's police service, announced on April 27 that Operation Fanacht would begin again at 7 am on Tuesday, April 28, and continue through the end of the May Bank Holiday weekend on Monday night, May 4.

At any one time, there will be over 2,500 Gardaí involved in checkpoints or high visibility patrolling.

According to RTE, Gardaí are operating a policing policy known colloquially as 'the four Es' - to engage, explain, encourage, and only if necessary enforce the emergency legislation.

Operation Fanacht previously ran from April 8 until April 13 inclusive in the run-up to, and during, the Easter Weekend. Afterward, gardai reported a "high level of compliance."

Deputy Commissioner, Policing and Security, John Twomey said on April 27: "When we last ran Operation Fanacht there was a high level of compliance from the public. It is vital that we see that again.

"I want to thank the public for their co-operation so far. We know it has not been easy and has required significant sacrifices.

"We need this compliance to continue. This is a critical week for the country. If we all work together, we can help save the lives of our family, friends, neighbours, and colleagues,” commented Deputy Twomey.

Deputy Commissioner Twomey added that it had been long planned to run Operation Fanacht again during this week in the run-up to and over the May Bank Holiday weekend.

The relaunch of Operation Fanacht comes as government officials continue to warn people that they must continue to adhere to public health advice:

So let’s be clear -not following public health advice is not consequence-free. It has an effect. What if it was your mum who ended up in intensive care? Or a loved one who passes away from this virus? Or a work colleague or neighbour who gets very ill. Stay the course. #StayHome