The UFC champion's legal team asked the court to give McGregor "one last chance." 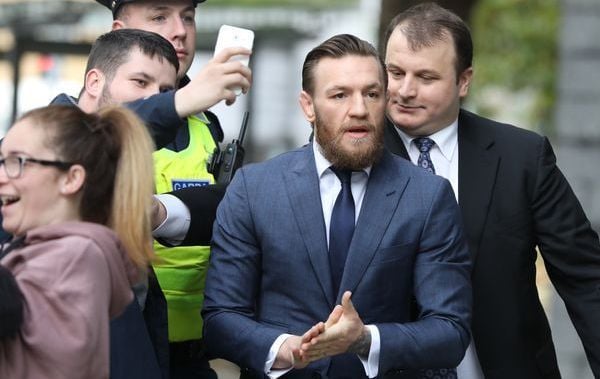 Members of the public attempt to pose for a selfie with Conor McGregor as he enters the Criminal Courts of Justice in Dublin today to face assault charges from April of this year. Leah Farrell / RollingNews.ie

UFC champion Conor McGregor fined $1,116 for punching man in a bar but avoids any jail time.

Irish sports star Conor McGregor pleaded guilty Friday to punching a man in a Dublin bar in an unprovoked attack. The MMA fighter faced a possible six months in jail for the charge but walked away with only a $1,116 fine (€1,000).

Judge Treasa Kelly determined that jail time was "inappropriate" for the assault charge after McGregor's legal team pleaded for "one last chance" for the Dubliner, who has previous convictions.

"I assure you nothing of this nature will happen again regarding me," McGregor said in court.

In August, TMZ released security camera footage of the Irish UFC fighter throwing a punch at pub patron Desmond Keogh while at the Marble Arch Pub in Dublin on April 6. Keogh had reportedly turned down an offer of McGregor’s ‘Proper Twelve’ whiskey, evidently angering McGregor.

"I was in the wrong," McGregor said during an August interview with ESPN.

"That man deserved to enjoy his time in the pub without having it end the way it did. ... I tried to make amends, and I made amends back then. But it doesn't matter. I was in the wrong. I must come here before you and take accountability and take responsibility. I owe it to the people that have been supporting me. I owe it to my mother, my father, my family. I owe it to the people who trained me in martial arts. That's not who I am. That's not the reason why I got into martial arts or studying combat sports. The reason I got into it was to defend against that type of scenario."

It is reported McGregor made a settlement deal with the man in question.

Read more: Conor McGregor said to have $900,000 bounty on his head from Irish mobsters after pub fight