Johanne Powell, who was a full-time carer for her disabled daughter Siobhan, has penned an emotional post on what would have been her daughter's 37th birthday. 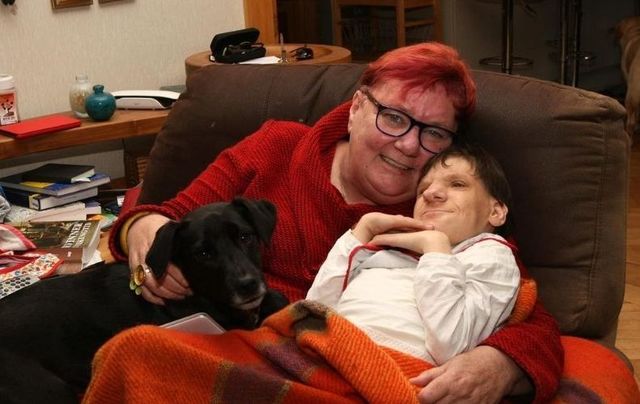 A Norwegian-Irish woman who was a full-time carer for her severely disabled daughter for 36 years has penned an emotional blog post on what would have been her daughter's 37th birthday.

Johanne Powell's daughter Siobhan was born with an extremely rare chromosomal disorder known as Ring Chromosome 8 and given just one year to live.

Siobhan peacefully passed away on August 4 last year at the age of 36.

Johanne, a Norwegian woman living in County Wexford, penned an emotional blog entry in February for what would have been her daughter's 37th birthday, stating that it has been "37 years of heartache and laughter, of hardship and fun, of great new friendships and terrible loneliness".

"Mainly it has been 37 years of love, unconditional, uncomplicated love," she wrote.

She wrote that the first years of Siobhan's life were marked by kidney trouble and said that her daughter likely would have died before her first birthday had she not received experimental treatment at Our Lady's Children's Hospital in Crumlin.

Even with that treatment, however, Siobhan was still missing one kidney, while her other kidney only worked at about 60%. She also developed epilepsy later in life, with Johanne describing her first epileptic fit as the "most frightening thing" she had ever witnessed.

Siobhan was fed through a tube for the first six months of her life and remained on liquids for the following 36 years.

Her condition was so rare that it didn't even have a name, Johanne said, while the chances of being born with it are more than one in a million.

Siobhan's condition naturally required round-the-clock care and Johanne admitted in 2016 that she was "bored out of her tree" by the constant repetition.

"I'm not doing this job by choice," she told the Irish Times in 2016. "I'm doing this job because I have to do it; because there is no alternative. I don't want to do it anymore. I'm bored. I'm bored out of my tree doing the same thing day in, day out, with no changes."

Johanne and her Irish husband Alan were required to be full-time carers, allowing them to have just three weeks of respite every year.

Johanne revealed that she could never be spontaneous with her husband and said that she didn't know what her local town looked like after 5 p.m.

The couple believed that Siobhan was "entitled to a life away from them" and put her name down for long-term residential care but had no success.

She told the Irish Times that felt guilty about not wanting her daughter at home but said there were times when she simply couldn't cope.

"It's hard to say these things, because you do feel guilty about saying you don’t want your daughter at home. It’s not that we don’t want her at home, but I don't think I can cope much longer," she told the Irish Times five years ago.

Johanne has spent much of her life fighting for disability and carer issues and said in the recent blog post that Siobhan had almost no access to therapy or education during her youth.

"The South Eastern Healthboard had very little input into her and our life. We would see the public health nurse maybe every second year, we never saw a social worker, in later years she would see  physiotherapists, occasionally a speech therapist and I think twice a dietician."

Siobhan attended pre-school at St. Claire's Day Centre in Wexford until she was 13, but Johanne was required to drive her to and from the school every day. A local politician eventually secured transportation to and from the pre-school after years of lobbying from Johanne and Alan.

She subsequently attended Ard Aoibhinn for six years where she was taught by a teacher from St. John's School in Enniscorthy.

"She loved it. I could see the improvement in her," Johanne told the Irish Independent last year.

Johanne also opened up to the Irish Times about the harsh realities of caring for a disabled child.

"I swear to God I could walk into a supermarket and rob the place blind, because once you have a child in a wheelchair, by definition you're a good person. It doesn't matter what you really are.

In a heartbreaking interview with Ireland's Late Late Show in 2016, Johanne said that she wished she could have met "the child that Siobhan could have been".

"You love her, but at the same time there’s a child there that you thought you were going to have and that you never met. I would love to meet the child that Siobhan could have been if she didn’t have the chromosome disorder."

In November 2020, Johanne said that she would do "anything" to get her daughter back for just a day so that she could hold her once again.