Irish man Thomas O'Halloran is being remembered fondly by the London Irish community who say they are in shock after his murder last week. 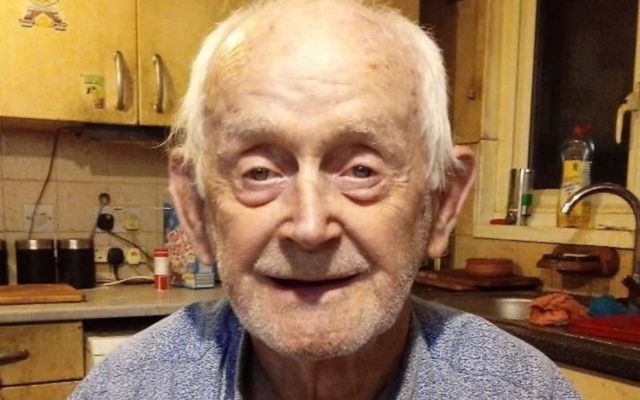 Thomas O'Halloran, 87, was stabbed to death while riding his mobility scooter in Greenford. Met Police

The Irish community in London came together on Sunday, August 21 for a musical tribute in honor of Thomas O'Halloran, the 87-year-old Irish grandfather who was stabbed to death while riding his mobility scooter last Tuesday, August 16.

More than 100 members of London's Irish community gathered on Cayton Road in Greenford, West London to pay tribute with Irish prayers and music to O'Hallloran, a native of Ennistymon, Co Clare.

Members of the Irish community in London gathered today to remember 87-year-old Thomas O'Halloran who was fatally stabbed close to his home in Greenford last Tuesday. Originally from Ennistymon in County Clare, Mr O'Halloran was described as a lovely kind gentleman who loved to play music | https://bit.ly/3PTMwmB

Wearing an assortment of Irish sports jerseys, mourners honored the "loving busker" who was known for playing the accordion at the Greenford Tube station.

Local musicians played several songs during the tribute, including songs regularly performed by O'Halloran when he was busking.

"He was just a lovely man," one person donning a Galway top told RTÉ News. "It has hit our total Irish society here, it has hit us big time."

Another person, wearing a Wexford top, told RTÉ: "When there is a tragedy or anything like that here in London, the Irish community they do rally around and they all come together."

Ambrose Gordon, 61, a friend of O'Halloran's, told the PA news agency that he would have loved the tribute.

"He’d be there on his little trolley and he’d have been playing his tunes and things like that," Gordon said.

"We came from every county today. We all wore our jerseys, so we’re very proud Irishmen, despite the fact we’re here 60 years."

Gerry Hehir, 65, another friend of O'Halloran's, told the PA that O'Halloran's death shocked the Irish community in London.

"I have lived here for 29 years. It’s a shock, the way it happened. I mean, there’s a lot of tragedies in London and in the wider place and all throughout the world, but it’s a very, very sad thing," Hehir said.

"He will be very well remembered for everything he’s done for the community."

"In the face of this kind of awful incident, we don’t know what to do and people feel completely helpless," Fr. Daly said.

A GoFundMe to assist O'Halloran's family with funeral expenses has surpassed its goal of £5,000 after being launched four days ago.

Lee Byer, 44, has been charged with O'Halloran's murder and is set to appear at London's Old Bailey tomorrow, Tuesday, August 23.

A Thousand Welcomes from Mag at Peggy's Cottage