Irish man Thomas O'Halloran, 87, described by police as "very well-known and much-loved," was stabbed to death in Greenford in London on August 16. 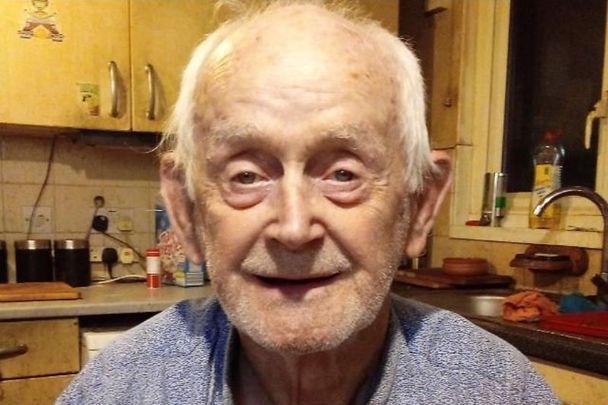 Thomas O'Halloran, 87, was stabbed to death while riding his mobility scooter in Greenford. Metrpolitan Police

Thomas O’Halloran, 87, is believed to have been on his way to busk when he was fatally stabbed while riding his mobility scooter in Greenford in London yesterday, Tuesday, August 16.

O’Halloran, who was originally from Ennistymon, Co Clare in Ireland, is being remembered fondly as a “wonderful” man who would busk in the Greenford area with his accordion.

I cannot believe I'm writing this

I met this wonderful man Thomas O'Halloran this June, playing tunes outside Tesco's in Perivale. He was 87 years of age!

This gentleman, was stabbed to death on his mobility scooter in broad daylight yesterday afternoon in Greenford!
R.I.P ? pic.twitter.com/L1kJxVhyZ3

Metropolitan Police said on Wednesday, August 17 that they are investigating the attack on the elderly man that they have identified as 87-year-old Thomas O'Halloran that occurred on Tuesday, August 16.

Police said they responded to reports of a man with stab wounds in Greenford just after 4 pm on Tuesday. They believe O'Halloran was stabbed only a short while earlier, but he managed to travel 75 yards or so in his mobility scooter to flag down a member of the public for help.

Officers responded and gave emergency first aid until the arrival of the London Ambulance Service and London's Air Ambulance. Despite the best efforts of the emergency services, O'Halloran was pronounced dead at the scene.

Detectives from the Met’s Specialist Crime Command are leading the investigation and they have released images of a man they are keen to identify as a matter of urgency.

The man police are seeking to identify was seen fleeing the scene armed with a knife. He was wearing grey shorts, a dark-colored t-shirt, a white baseball cap, and white patterned builder-style gloves.

An 87-year-old grandfather was brutally murdered in Greenford shortly after 4pm yesterday.

This man was seen running away from the scene with a knife.

Detective Chief Inspector Jim Eastwood, who is leading the investigation, said the man is "clearly a dangerous individual" and people are advised "not to approach him" and instead call 999 if they know him or have any information about his whereabouts.

Eastwood said: “My team and I have been working around the clock to bring Mr. O’Halloran’s killer to justice, but we need your help. If you have any information at all that will assist us with our investigation – no matter how small – please contact us or alternatively, contact Crimestoppers anonymously.

“I’d also appeal to anyone who might have dash cam or cycle helmet footage that might have captured the incident to get in touch with us.”

Chief Superintendent Sean Wilson, who is in charge of policing for west London, including Ealing, said: “Mr. O’Halloran had his life needlessly snatched away in a shocking act of unprovoked violence.

“I understand that the community will, quite rightly, be shocked and appalled by this incident as I am too.

“Mr. O’Halloran was a very well-known and much-loved member of our community. My thoughts are with his family and friends. I’d like to appeal for their privacy to be respected while they come to terms with their loss.

“Detectives from the Specialist Crime Command, with the assistance of my officers, have been working tirelessly over the last 20 hours to understand what has happened and to identify who is responsible for this horrific crime."

Anyone with footage of the incident is asked to upload it using this online form.

Anyone who knows the man in the image, or has information about the murder, is asked to call the incident room on 020 8358 0300 quoting 4691/16AUG. Alternatively, you can contact the independent charity Crimestoppers, anonymously, by calling 0800 555 111 or by visiting CrimeStoppers-uk.org.

A friend of O'Halloran, who did not wish to be named, told the PA agency that the elderly Irish man was on his way to busk when the shocking attack occurred.

“He was coming back from Perivale to play his accordion and make some money for his family and he was stabbed to death," the friend said.

Shop owner at Greenford Station Hitesh Patel, 62, told the Evening Standard that O'Halloran would often play accordion on his mobility scooter to raise money for victims of the Russian invasion of Ukraine.

“He always had a Ukraine flag on the front of his basket. It said Help for Ukraine as he played. He was [a] very good, kind man.

“I saw him just before he was killed heading up to the A40 on his scooter I was filling up with petrol but I wish I had said something.

Patel added: “His wife was also always with him in her mobility scooter. He told me he was Irish and had three sons. It’s so sad. I can’t believe anyone would hurt him in broad daylight like that. We will miss him and his playing around here.”