The Sportswoman of the Year awards recognize the abilities and achievements of women in Irish sports. 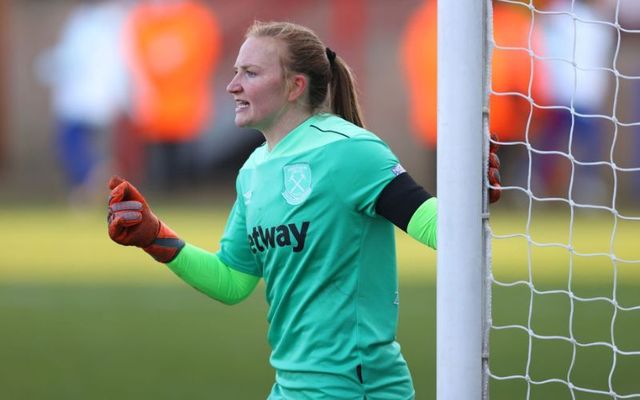 Brosnan, who was born and raised in New Jersey, won the Sportswoman of the Month award for October for her central role in helping Ireland qualify for the World Cup for the first time.

Though American, Brosnan's paternal grandparents hail from Co Roscommon and Co Kerry, paving the way for the New Jersey native to line out for Ireland.

Having established herself as Ireland’s first-choice goalkeeper early in 2022, she went on to record seven clean sheets in nine games. Her performances played a huge part in what proved to be a magical year for the team, the highlight being her critical penalty save in the 1-0 World Cup play-off win over Scotland in Hampden Park in Glasgow.

Established in 2004, the aim of the Sportswoman of the Year awards is to recognize the abilities and achievements of women in Irish sports. The awards run over a 12-month period, with the judges selecting a winner each month for her ability to excel at sport.

From the 12 monthly winners, the overall Sportswoman of the Year is selected and announced in December. The winner is decided by a judging panel, which is represented by individuals from the world of sports journalism.

While Brosnan was unable to attend the gala award ceremony at Dublin’s Shelbourne Hotel just before Christmas, her teammate Diane Caldwell accepted the award on her behalf. Brosnan shared the award for October with boxer Kellie Harrington.

Overall Sportswoman of the Year Winner

Boxer Amy Broadhurst, the first Irish female boxer to take gold at the World Championships, European Championships, and Commonwealth Games, was crowned The Irish Times Sport Ireland Sportswoman of the Year for 2022.

Broadhurst became only the second Irish fighter to land the three titles - Michael Conlan being the only other to achieve the feat. The 25-year-old Dundalk woman was named ‘Boxer of the Tournament’ at the Europeans. 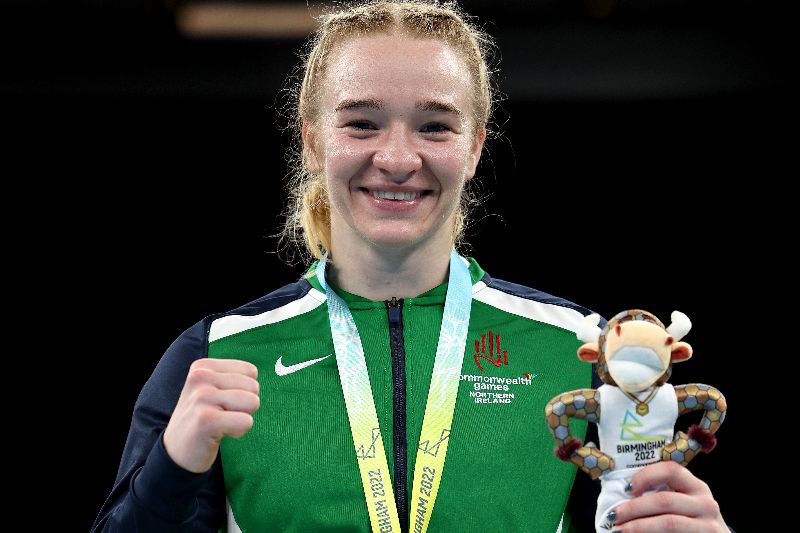 Katie Taylor, Kellie Harrington, and Conlan had been Ireland’s only amateur world champions until Broadhurst made it four with her victory over Algeria’s Imane Khelif in the light-welterweight final. The Dealgan Boxing Club fighter, who was making her fifth appearance in the World Championships, overcame her opponent’s five-inch height advantage to take gold on a unanimous points decision in Istanbul in May.

Teammate Lisa O’Rourke made it a historic double for Irish boxing following her into the ring and claiming gold in the 70Kg final.

Broadhurst is a close friend of Katie Taylor, and the Bray boxer invited her to Connecticut to spar with her in the run-up to Taylor’s fight against Amanda Serrano. Those couple of weeks clearly proved to be highly useful for both with Broadhurst claiming that she learnt a lot from Taylor who she described as 'a big role model’ and ‘the best female boxer ever.’

While Broadhurst, who was recently named best light welterweight boxer in the world, will no doubt be looking to turn professional at some point, for now, she says her eyes are firmly set on the Paris Olympics in 2024.

That penalty save and a second-half goal by substitute Amber Barrett of Turbine Potsdam secured a memorable victory for the ‘Girls in Green’ over Scotland and booked their ticket to the World Cup in Australia / New Zealand later in 2023.

Barrett, whose grandparents were born and bred in Creeslough and who spent a lot of time in the village growing up, dedicated the goal to the ten people who died following an explosion at a petrol station in the village just four days earlier.

The Glasgow win was the culmination of a long qualifying campaign that featured two wins over group second seeds Finland, a 1-1 draw away to world number two side Sweden and an away win over Slovakia.

Led ably by Katie McCabe, the campaign featured strong contributions by players like Diane Caldwell, Abbie Larkin, Áine O’Gorman, and Saoirse Noonan who were on hand to receive the trophy on behalf of the team from Irish legend Olivia O’Toole, who was capped over 130 times for her country, the most appearances for the Irish national team of any player male or female.

Vera Pauw’s team, who have been drawn in Group B alongside Australia, Canada, and Nigeria, will travel to their Brisbane base determined to make more history. 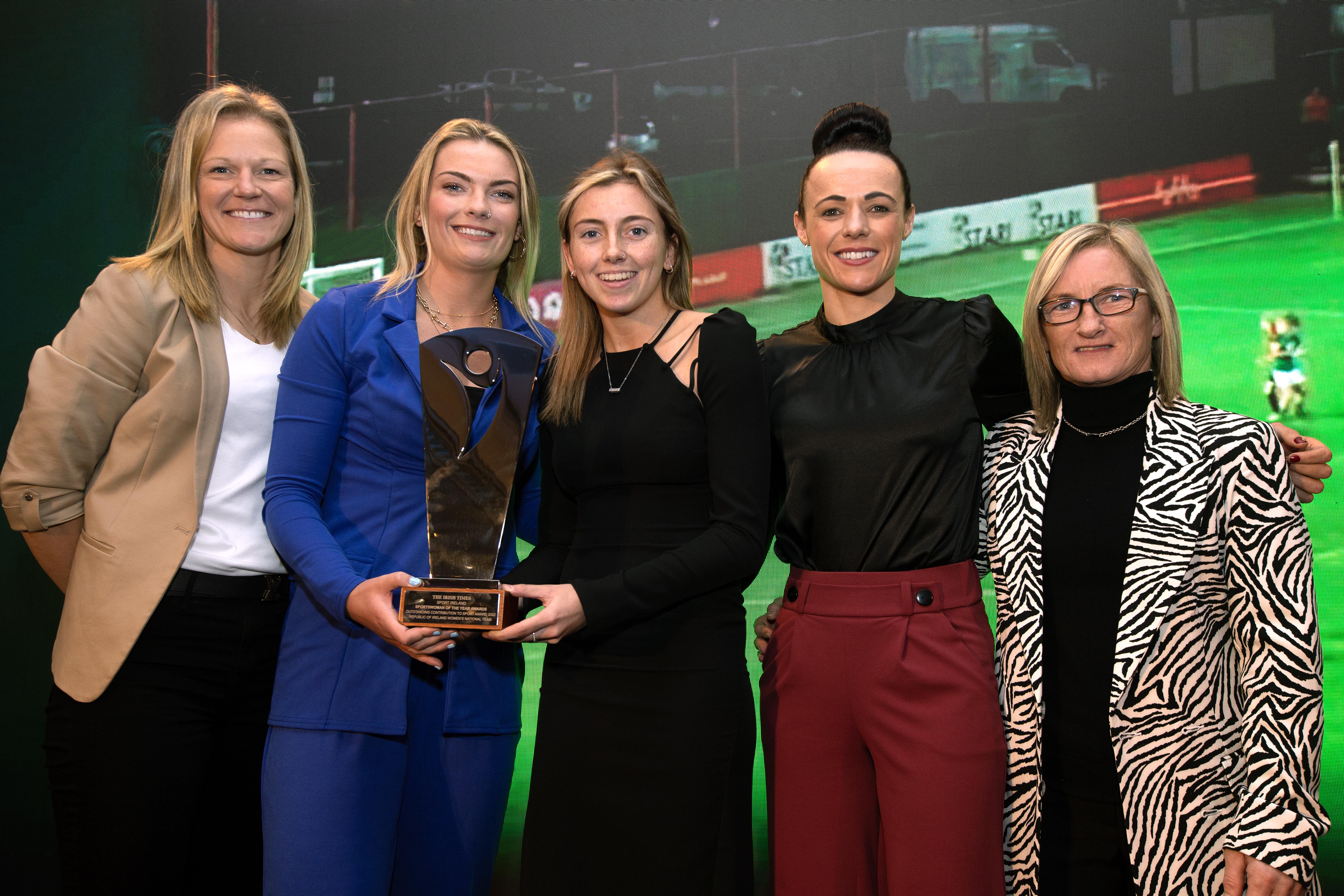 Paying tribute to all the 2022 winners, Sports Editor of The Irish Times Noel O’Reilly said women’s sport this year has been momentous on both the national and international stages.

“Yet again the bar has been pushed ever higher with inspirational performances and achievements across the board," O'Reilly said.

"A huge congratulations to all the monthly winners, sportswomen whose stories continue to show the next generation that nothing is impossible. They are heroes of Irish life, examples to our daughters and sons and a credit to their families, coaches, partners, and friends.”

Congratulations and thank you to all of our winners for all the heart-stopping moments in a terrific year for Irish sportswomen. @irishtimessport #ITSportswoman #WomenInSportIRE pic.twitter.com/Oe1GlkKdaY

Ireland's Minister for Tourism, Culture, Arts, Gaeltacht, Sport and Media, Catherine Martin TD said: “This has been an excellent year for Irish sport, and it is important to recognise and celebrate the success of our many sportswomen across such a broad range of sports during the year. Their dedication and commitment to their sport and their determination to succeed is so inspiring and is such an example for young girls all over the country. I want to congratulate all of this year’s award recipients and acknowledge their enormous contribution to Irish sport.”

Dr. Una May, CEO of Sport Ireland, paid tribute to all the award winners: "Over the past year we have witnessed some remarkable successes in a wide range of sports with our athletes making history and breaking records on a regular basis. Sport Ireland are a proud partner of The Irish Times to mark their achievements.

"I would like to congratulate all of today’s award winners and thank them for being such fine ambassadors for both their sport and their country."